Protesters set up multiple roadblock; police from at least six states are in the county. 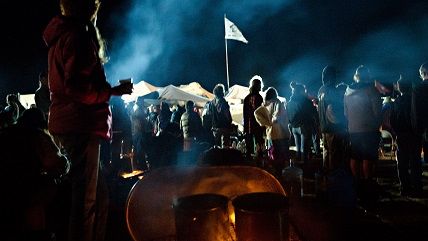 Police in Cannonball, North Dakota descended on a camp protesters put up on property recently purchased by the company building the Dakota Access Pipeline which is supposed to run from the Bakken oil fields in North Dakota to an oil tank farm in Illinois, making 141 arrests according to the local sheriff.

More than 300 riot cops were involved in the operation, according to an account from protesters organizing as the Camp of Sacred Stones, which reported at least eight ATVs, five armored vehicles, and two helicopters as part of the operation to take down the 1851 Treaty Camp, named after a treaty protesters and tribal leaders argue had made the land unceded Dakota territory that was part of the Standing Rock Reservation. It was reportedly the first time protesters had placed themselves directly in the path of the proposed pipeline.

In a statement, Morton County Sheriff Kyle Kirchmeier claimed protesters had "escalated unlawful behavior this weekend by setting up illegal roadblocks, trespassing onto private property and establishing an encampment," which had "forced law enforcement to respond at this time," as NBC News reports. According to the AP, protesters used burned vehicles and sheets of plywood to block a state highway as well as a local bridge.

One woman at the protest fired three shots, "narrowly missing a sheriff's deputy," a spokesperson for the North Dakota State Emergency Services said. Authorities say law enforcement officials did not fire at anybody, while protesters say pepper spray and percussion grenades were used against them as well as shotguns with less lethal ammunition and a sound cannon, and that at least one protester was tased and another hit in the face by a rubber bullet. No serious injuries were reported, according to the AP.

The governor of North Dakota issued an emergency declaration for Morton County, where mass protests over the pipeline have coalesced, activating the Emergency Management Assistance Compact, the product of a Clinton era law creating interstate agreements for emergencies, and bringing law enforcement to Morton County from at least five other states.

The Standing Rock Sioux tribe has gone to court to challenge the Army Corps of Engineers' decision to grant permits related to the pipeline, according to the AP, which reports that a judge last month declined to order construction be suspended while a number of federal agencies have stepped in to order construction be suspended around Lake Oahe on the Missouri River. Construction has continued on privately-owned land.