Cannabis candy in trick-or-treat bags is "a very real scenario," they warn. It's not. 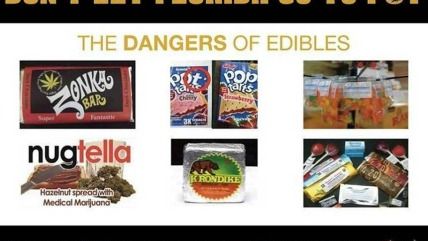 In 2014, the last time Florida voters considered a medical marijuana ballot initiative, opponents warned that doctor-approved pot cookies would abet rape. This year anti-pot groups are warning that cannabis candy made for patients could be surreptitiously handed out to children on Halloween, despite the fact that there are no confirmed cases of anything like that happening in the two decades since California became the first state to legalize medical marijuana in 1996.

"It is almost impossible for anyone, let alone a child, to tell a marijuana gummy bear or cookie from the real thing," said Calvina Fay, director of the Drug Free America Foundation, at a press conference on Monday, a week before Halloween and two weeks before voters decide the fate of Amendment 2, which would allow the use of marijuana for the treatment of eight specified diseases as well as "other debilitating medical conditions of the same kind or class as or comparable to those enumerated." The No on 2 group Don't Let Florida Go to Pot says "Florida children who go door to door for candy on Halloween may one day be at risk of receiving edible marijuana products if Amendment 2 comes to pass." The group claims "it's a very real scenario playing out in states like California, Washington and Colorado, where marijuana has been legalized."

The Florida Sheriffs Association (FSA) has joined other opponents of Amendment 2 in hyping the mythical menace of marijuana edibles in trick-or-treat bags. "After other states approved legislation," said FSA President Jerry Demings, the Orange County sheriff, "they saw a surge in marijuana edible products that are clearly attractive to children, advertised and marketed in commonly recognized edibles such as lollipops, candy bars, Pot-Tarts, and Krondike Bars."

What those states did not see, however, was a surge in tots tripping on THC-tainted treats they got from sneaky strangers on Halloween. The hazard described by Fay and Demings did not materialize in Colorado after medical marijuana became legal there in 2001, after dispensaries began proliferating in 2009, or after state-licensed recreational sales started in 2014. If surreptitious dosing of trick-or-treaters with cannabis candy has happened in any of the two dozen other states where marijuana is legal for medical or recreational use, it seems to have escaped the attention of police and the press. The Orlando Sentinel reports that Demings "could not offer examples of children receiving laced Halloween candy in states where medical marijuana is legal." Miami New Times noted that "zero cases" have been documented in Colorado or Washington, the first two states to legalize marijuana for recreational use.

That's hardly surprising, since pranksters have little incentive to substitute expensive marijuana edibles for cheap Halloween candy, especially since they would not get to witness the results, which would kick in up to two hours after ingestion. The fear of cannabis-infused Halloween candy, which goes back a decade at least and has been used for political purposes in the past (against California's Proposition 19 in 2010, for instance), is a variation on older urban legends about poison, needles, razor blades, and glass shards lurking in trick-or-treat bags. Last Halloween hysterical cops and yellow journalists put a new twist on these stories, warning parents that candy-colored MDMA tablets might be mixed in with their kids' Jolly Rancher gummies and miniature peanut butter cups.