Archie and Jughead Get Weird

Liberated from the Comics Code, the Riverdale gang finds new ways to be strange. 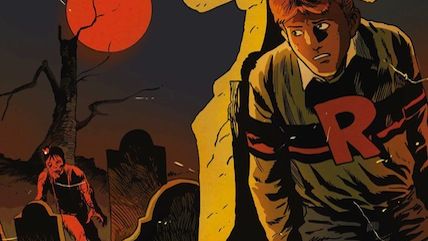 I'm afraid I botched a prediction pretty badly back in 2011. I was writing about the news that Archie Comics was dumping the Comics Code, a set of rules the industry had adopted in the '50s to stave off the threat of government censorship, and in the process I said this:

Don't worry, the kids of Riverdale aren't about to endure a darker, edgier reboot. You just don't need the Comics Code Authority's seal of approval to know what you're getting when you buy an Archie comic book.

Since then, the folks at Archie HQ have branched out in a bunch of different directions, and some of those branches definitely aspire to dark-and-edgy status. There's a whole "Archie Horror" line, featuring a gory zombie comic called Afterlife with Archie and a second series called Chilling Adventures of Sabrina. The latter is not, I gather, sitcom material:

There is also a non-horror series in which Archie's gay pal Kevin becomes a senator and Archie dies stopping his assassination. Today I learned about a bizarre new comic in which Archie and his friends travel back in time to meet the Ramones. And the entertainment press has started buzzing about Riverdale, an upcoming Archie TV show whose tone is being compared to film noir and Twin Peaks. That's a television series, not a comic, but it's gonna spawn a comic-book version too.

If you prefer the wholesome Archie that your grandparents grew up with, don't fret: Those comics are still coming out too. (Needless to say, these stories all take place in different timelines. The Archieverse is a multiverse.) So the gritty stuff isn't squeezing out the old Archie; it's an addition rather than a replacement. The death of the Comics Code has given us more choice and plenitude, which as far as I'm concerned is a good thing. I'm just sorry I didn't have the foresight to see just where the post–Comics Code Archie would be heading.

Bonus links: Dark Archie may be a new development, but Weird Archie certainly isn't. Check out Al Hartley's right-wing, evangelical Archie comics from the '70s, which among other wonderfully strange moments featured Betty denouncing Darwinism in the schools:

The Christian Archie stories were produced by a separate company, called Spire—and Spire, interestingly, eschewed the Comics Code seal of approval, just like the Archie Horror folks do today. The Christian Archie comics were therefore able to allude explicitly to sex, drugs, and other subjects barred from the mainstream Archie line. And they did!

Another flavor of Weird Archie manifested itself in the 2001 film Josie and the Pussycats, which is part conspiracy movie and part self-aware anti-corporate satire. And if unsanctioned parodies count, there's the underground cartoonists Jay Kinney and Paul Mavrides' 1979 classic "Kultur Documents," in which Archie and Jughead are reimagined as Anarchie and Ludehead, a couple of punk rockers rebelling against the hippies. Little did we know that one day the characters who inspired them would be hanging out with the Ramones.