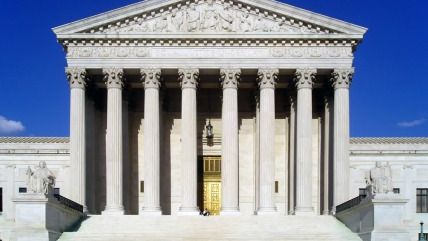 The next president will appoint at least one and perhaps as many as three Supreme Court justices, who in turn will have a decisive impact on the Court's jurisprudence for decades. But last night's presidential debate revealed that neither of the major-party candidates understands what Supreme Court justices are supposed to do.

Moderator Chris Wallace started the discussion off on the wrong foot by asking the candidates where they "want to see the Court take the country," implying that justices are legislators in black robes, pursuing a policy agenda instead of deciding the controversies that come before them. Both candidates seemed to agree with that premise.

Donald Trump promised that "the justices that I'm going to appoint will be pro-life" and will therefore vote to overturn Roe v. Wade, the 1973 ruling that discovered a right to abortion in the 14th Amendment's Due Process Clause. There are good reasons to think Roe v. Wade was wrongly decided, or at least that its constitutional rationale left much to be desired. But a justice's personal views on abortion are logically and legally distinct from the issue of Roe's soundness. A conscientious justice strives to separate his policy preferences from the question of what the Constitution allows or requires.

Hillary Clinton also promised to appoint justices who will help her achieve the policies she favors, which include speech restrictions that protect politicians like her from criticism close to an election. Clinton said her Supreme Court picks "will stand up and say no to Citizens United, a decision that has undermined the election system in our country because of the way it permits dark, unaccountable money to come into our electoral system."

Clinton neglected to mention, as she always does when discussing Citizens United v. Federal Election Commission, that the case involved a movie that made her look bad. The Court concluded that a conservative group organized as a nonprofit corporation had a First Amendment right to present Hillary: The Movie on pay-per-view TV while Clinton was seeking the Democratic presidential nomination in 2008. Presumably Clinton disagrees. But instead of explaining why, she says the decision should be overturned because "it permits dark, unaccountable money to come into our electoral system." Clinton worries that these dastardly dollars are "drowning out the voices of ordinary Americans and distorting our democracy." But that is not a constitutional argument. Even if Clinton were right about the baleful impact of Citizens United, it would not follow that the First Amendment permits the sort of self-serving censorship she favors.

In addition to promising Supreme Court justices who agree with her that suppressing Hillary: The Movie was consistent with freedom of speech, Clinton said her picks would "stand on the side of the American people, not on the side of the powerful corporations and the wealthy." That sounds like she thinks the Court should be biased against big businesses and rich people, a position that cannot be reconciled with the constitution or the statutes that the justices are charged with interpreting and applying. The law is supposed to provide equal protection to all Americans, regardless of their income or wealth.

Clinton is also wrong when she says "the Supreme Court should represent all of us." That is what a democratically elected legislature is supposed to do. A court is supposed to apply the law, a function that does not cater to constituencies or dole out favors based on political considerations.

In light of that role, Chris Wallace's other question about the Supreme Court was more apposite: "What's your view on how the Constitution should be interpreted? Do the founders' words mean what they say, or is it a living document to be applied flexibly according to changing circumstances?"

Clinton did not even attempt an answer, while Trump at least tried to mouth the words that somebody told him conservatives expect to hear from a Republican presidential nominee:

The justices that I am going to appoint…will interpret the Constitution the way the founders wanted it interpreted….I don't think we should have justices appointed that decide what they want to hear. It's all about the Constitution…the way it was meant to be.

It's not completely clear how that would work in practice, since we can't actually read the Framers' minds. But Trump's description seems consistent with interpreting constitutional provisions based on the original public understanding of them, the approach favored by Justice Clarence Thomas. An originalist approach rejects the idea that the Constitution is "a living document" in the sense that its meaning changes over time—so that, for example, the 14th Amendment's guarantee of due process can stop states from banning abortion, even if that is not the way the provision was understood when it was approved.

While the latter approach can produce liberty-friendly results, it does so at the cost of loosening the Constitution's constraints on goverment power, a tendency that is decidedly unfriendly to liberty. Hence it would be encouraging to hear a major-party candidate endorse originalism—if we had any reason to think he understood its value or would make decisions based on that understanding. It's hard to believe that's true of Trump, who thinks the Constitution has 12 articles, empowers judges to sign bills, authorizes presidents to rewrite libel law, and allows the government to take away the citizenship of people born in the United States. Trump claims he has read the Constitution, but if so he did not retain much.

Meanwhile, in areas such as freedom of speech, gun control, surveillance, executive power, and federal authority, Clinton takes positions that are plainly inconsistent with the Constitution. That means voters who assume they have to choose between the two major parties will be choosing between a candidate who doesn't know what the Constitution says and a candidate who doesn't care.