But what about Fourth Amendment cases? 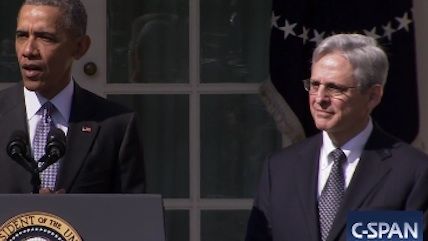 For nearly seven months now Republican Senators have refused to either hold hearings or hold a vote on President Barack Obama's nomination of Judge Merrick Garland to the U.S. Supreme Court. But what happens after next month's presidential election? More specifically, what happens to the Garland nomination if Hillary Clinton wins? Will Republican Senators move to confirm Garland in a lame-duck session on the theory that Clinton will throw Garland under the bus and nominate a more aggressive liberal jurist of her own choosing early next year?

According to Republican Sen. Mike Lee of Utah, the answer to that last question seems to be a firm no. As The Washington Post reports, Lee rejects the idea that Garland is any sort of moderate compromise. Lee thinks that Garland will prove to be just as liberal as any Hillary Clinton SCOTUS pick. Here's what Lee had to say this week after a debate at Brigham Young University, via the Post:

"Make no mistake: As a former law clerk . . . I don't believe there would be a real substantive distinction, a real noticeable difference between the voting pattern of a justice who would be appointed by a President Hillary Clinton . . . and Merrick Garland," he told reporters after the debate. "I just don't think there is much, if any, difference."

Lee argued that "the last Democratic nominee to the Supreme Court . . . who voted independently" was Byron White, appointed by John F. Kennedy in 1962.

"Not a single Democratic nominee to the U.S. Supreme Court since then has voted independently on those matters. Not one," Lee said. "Republicans have been all over the map, all over the spectrum. Democrats vote in lock step. . . . That is how it works. I don't think Merrick Garland would be any different. The only difference is his age."

But the legal left has its divisions, too, and those divisions are likely to become more pronounced on the Supreme Court in the years to come. For example, consider those cases that deal with the criminal justice system and the Fourth Amendment. When it comes to that area of the law, Merrick Garland has a record of judicial deference to police and prosecutors. In that regard, Garland most closely resembles liberal Justice Stephen Breyer, whose own record is marked by extremely deferential votes in favor of law enforcement in divided Fourth Amendment cases.

But we should not lose sight of the fact that Breyer's approach is not the only approach favored by liberal judges. There is also the approach of Justice Sonia Sotomayor, who "is fast becoming the Supreme Court's biggest defender of the Fourth Amendment," as I detailed back in July. Unlike Breyer and Garland, Sotomayor has little interest in tipping the scales in favor of police and prosecutors. As she told one Justice Department lawyer during the 2015 oral arguments in Rodriguez v. United States, "we can't keep bending the Fourth Amendment to the resources of law enforcement."

I suspect that if Merrick Garland ever ends up on SCOTUS, he is not going to vote in lock step with opinions like that.