Terence Crutcher was shot and tased by officers, received no immediate medical attention. 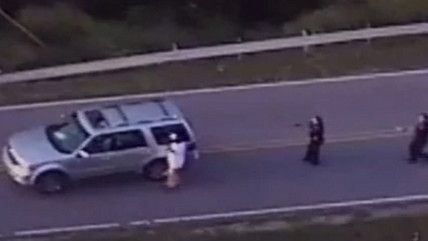 Tulsa police shot and killed Terence Crutcher, a 40-year-old unarmed man, last Friday. Newly released video from a police helicopter and a police cruiser's dashboard cam show the last minutes of his life, as he walks with his hands raised toward his SUV parked on the dividing line of a two-lane street, while 3 officers have their guns drawn on him.

Officers were responding to a 911 call about an abandoned vehicle blocking traffic—Crutcher's SUV—and a man who might have been "smoking something" running from the car in fear that it was about to blow up.

None of the officers were wearing body cameras, despite the fact that the Tulsa PD received a federal grant of nearly $600,000 to equip the department with such gear. Because of the lack of body cams, it's not clear what made the officers on the ground feel they needed to draw their guns on Crutcher, who though he had his hands raised, apparently refused officers' instructions to not approach his vehicle.

What is clear from the helicopter video is that even from afar, police considered this unarmed man a threat. One of the two officers speaking on the helicopter video notes that Crutcher is walking towards his vehicle, and appears to in defiance of the officers' commands:

Officer 1: Time for taser, I think.

Officer 2: Yeah, I've got a feeling that's about to happen.

Officer 1: That looks like a bad dude, too. Probably on something.

Seconds later, Crutcher can be seen dropping to the ground. Then, a female voice is heard yelling "shots fired," as the helicopter's point-of-view reveals Crutcher's bloodied body. It takes nearly two minutes for the officers to even approach him to check his vital signs. Police spokesperson Jeanne MacKenzie later said at a police briefing, "I don't know that we have protocol on how to render aid to people," according to the Chicago Tribune.

Crutcher was shot by Officer Betty Shelby and tased by Officer Tyler Turnbough, both of whom were placed on administrative leave pending an investigation. Police Chief Chuck Jordan conceded the video footage of the shooting is "very disturbing" and "very difficult to watch." U.S. Attorney Danny Williams confirmed a federal investigation into the shooting has been initiated.

Earlier this year, Robert Bates, a Tulsa county reserve deputy, was sentenced to four years in prison over the 2015 shooting of unarmed Eric Harris during an undercover sting operation. Bates, a 73-year-old insurance executive at the time, claimed he thought he was reaching for his Taser when he fatally shot Harris. It was later revealed that Bates received no firearm training, but was allowed to work in the field with the Violent Crimes Task Force, a division of the Sheriff's Office to which he had make significant financial contributions. As Harris lay dying, complaining of difficulty breathing, another deputy officer told him "Fuck your breath."