Even though states are required to submit such data, the feds have yet to punish states that fail to comply. 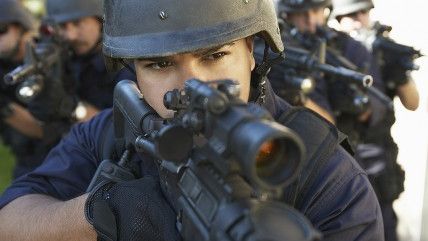 Over the past three years, the federal government's lack of a nationwide database for shootings by police has received ever-increasing attention. Several media outlets have taken it upon themselves to create such databases, with The Washington Post winning a Pulitzer Prize for its efforts last year.

Even though FBI Director James Comey concedes that it is "embarrassing and ridiculous" that such data is not required to be submitted by local police agencies to the federal government, the feds have long claimed to be hamstrung by policies that only call for voluntary reporting of police shootings to the FBI.

But the Justice Department's Arrest Related Death (ARD) program already requires states to submit data on officer-involved killings of civilians. According to a report in The Daily Beast by Justin Glawe, this program remains woefully under-reported:

Several states and the District of Columbia have not reported any data on arrest-related deaths despite being required to do so by law. According to the Justice Department, from 2003 to 2011, Arkansas, Louisiana, Maryland, Mississippi, Montana, Nebraska, Nevada, New Mexico, North Carolina, Oklahoma, Tennessee, Wisconsin, and Wyoming have, in several of those years, not reported to the program. Georgia has never reported to the program.

Because of this under-reporting, the federal government has failed to track almost half of all officer-involved killings during that eight-year period. More accurate numbers began to be compiled by 2009, when the Justice Department started scouring the internet for media reports of killings by police that were not reported by the states.

There's a strange gulf between "voluntary" and "mandatory" at place here. Though states are required to submit this data to the feds, the Justice Department's Bureau of Justice Statistics complained in its report on the ARD that they were frustrated in their efforts by the "methodological limitations" caused by voluntary reporting from the states.

The Death In Custody Reporting Act, reauthorized in 2014, authorizes the Attorney General to cut up to 10 percent of federal law enforcement grant funding to states that fail to comply with such reporting, but as Glawe writes, "There is no indication that this punishment mechanism has ever been implemented."