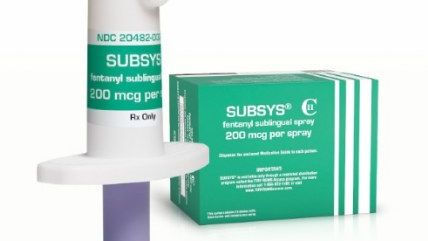 Anti-marijuana advocates attacking pushes toward legalization often deliberately villainize capitalism in their efforts. They warn that the demand for legal weed will lead to the rise of "big marijuana," which they compare to "big tobacco" and other large corporations that have earned the ire of a decent-sized chunk of the citizenry. The argument doesn't seem to be working, if polls are any indication, but it looks like that's what organizations like Smart Approaches to Marijuana (SAM) are going to use to oppose initiatives on the ballot this fall in several states.

Coincidentally, you know who else pisses off average Americans? "Big pharma." In actuality, the anger should be directed at both the pharmaceutical industry and the federal government. As we've learned from the $600 EpiPen scandal, it's the government's role in protecting medical monopolies that helps drive up prices.

Here's where things get awkward for organizations like SAM. A pharmaceutical company based out of Arizona has donated $500,000 to the effort to oppose a marijuana legalization effort in that state. Let's make it even more awkward. The drug manufacturer, Insys Therapeutics Inc, produces a cancer pain relief spray with an active ingredient that's currently high profile in the drug wars: fentanyl.

Fentanyl is the opioid driving the latest of the drug war panics, heightened by Prince's recent death. Even as criminal justice reformers are attempting to reduce or eliminate drug-related federal mandatory minimum sentences, lawmakers are trying to enhance sentences for fentanyl-related crimes.

Steven Nelson at U.S. News and World Report noted the donation and researched Insys' offerings. Subsys is the only drug they have on the market right now, but they do have an interesting past:

From 2011 through at least last year, Insys also sold a second product: a generic equivalent to Marinol, a synthetic version of the cannabinoid THC (tetrahydrocannabinol), which the Food and Drug Administration allows for treatment of cancer and HIV-related symptoms like nausea and loss of appetite, which cannabis advocates say the raw plant material can treat without a corporate middleman. Insys said in its August filing it has no plans to resume those sales.

The end result of all of this is that it's the pro-marijuana side now claiming that big industry is trying to thwart the will of the public and influence the vote. The head of the pro-initiative group in Arizona said the Arizonans for Responsible Drug Policy (the anti-legalization group) is now "tainted" by the donation. The anti-legalization group told Stevens they're keeping the money with the argument that Insys is at least based out of Arizona, unlike some of the donors who are giving money to pass the initiative.

Obviously, this means that Arizonans for Responsible Drug Policy are openly embracing their opposition to legalization of marijuana as a protectionist defense of entrenched business interests, and not because of any sort of public health reasons. This probably doesn't come as a surprise to many. But citizens should know that this sort of attitude that blocks alternative treatment options is exactly why the EpiPens are so expensive.

Read more about the donation here. Current polls in Arizona have legalization support up by 10 percentage points, but there's also a significant number of undecided voters who could change the outcome.