The big purchase is a good metaphor for the state of high speed rail in America right now, where politically driven promises can't overcome hard reality. 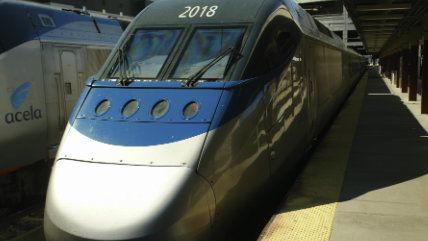 Amtrak's announcement that it plans to spend $2.4 billion upgrading its fleet of Acela trains is a little bit like a guy who plans to buy a new Ferrari to use on his daily commute and nothing else.

Sure, you've got a flashy new toy that can outrun anything else on the road—but if the roads are clogged and you can't put the pedal down to really make that baby hum, then what's the point?

The 28 new trains will be running by 2019 and will be able to go 160 mph, according to Amtrak. That's 25 mph faster than the Acela's current top speed. That modest increase in speed is a key part of Amtrak's decision to purchase the new trains—or at least a key part of their public sales pitch—and was dutifully reported in the media as evidence that the government-run train system would soon provide faster service up and down the east coast.

Is this the European-style high speed rail of progressive dreams? Amtrak's president and CEO, Joe Boardman, seems to think so. He said the new trains will provide passengers with "the experience of the future."

The reality of the present suggests a different outcome.

Even if the new trains are capable of going faster, that doesn't mean they actually will. In fact, they probably won't, because the current Acela almost never reaches top speed. Like highways, railroads have speed limits that take into account infrastructure and congestion. Most of the Northeast Corridor between Washington, D.C., and Boston is crowded with slower commuter trains and traverses rail lines that aren't capable of handling an Acela train at top speed.

According to Amtrak's official Northeast Corridor timetable (which contains the speed limits for every section of rail between D.C. and Boston), there are just three small patches where the trains are allowed to go 135 mph or faster.

Going north to south, the first is a 50-mile stretch in Rhode Island and eastern Connecticut, followed by a 25-mile stretch in central New Jersey and then a 20-mile stretch south of Wilmington, Delaware and into the very tip of northeastern Maryland. That's all.

"The reality is some of the $2.45 billion will be spent improving a short stretch of track between Washington and Baltimore, but this is likely to shave no more than a few minutes off its train times," says Randal O'Toole, a senior fellow on transportation issues at the Cato Institute.

Between New York and Washington, the current average speed of Amtrak's fastest "high-speed" Acela is 82 mph, but most run at about 78 mph, O'Toole's research shows.

"Will the $2.45 billion loan allow Amtrak to boost that average speed to more than 85? Probably not," he says.

Meanwhile, Amtrak has a $21 billion maintenance backlog. Upgrades that improve safety and reliability along the route would be welcome, and maybe some of the aging Acela cars are due for replacement—but does that mean they all need to be scrapped and replaced?

In some ways, this latest purchase is a metaphor for the state of high speed rail in America right now. The Obama administration and Amtrak officials have spent the last eight years promising that railroads—a technology of the 19th and early 20th centuries—would be the transportation system of the future. Those grand plans to reshape how Americans travel keep running into some pesky facts of life in the 21st Century: like the fact that most of America is not densely populated enough to make high speed rail work the way it does in Japan or Germany, or the fact that there's a limited amount of space on train lines in the northeast.

President Barack Obama started beating the drum for high speed rail even before he became president. The federal stimulus bill, which Obama signed into law in February 2009, contained $8 billion for high speed rail projects. A quarter of that money was earmarked for a high speed rail project in California that's more than a decade beyond schedule and billions of dollars over-budget. He kept pushing for more, including a promise made in his 2010 State of the Union address to provide 80 percent of Americans with access to high speed rail within 25 years.

After the speech his administration laid out ambitious plans for high speed rail corridors in the northeast, yes, but also across the southeast, in Texas, in California and a few other places where it wasn't needed and didn't make sense.

"I think President Obama would like to be known as the high-speed rail president, and I think he can be," Transportation Secretary Ray LaHood told NPR at the time.

As Obama gets ready to leave office, that dream of a European-like high speed rail system running from Boston to Washington, D.C., is likely an impossible one, because of the lack of a dedicated line not shared by slower commuter trains.

A European-style high speed rail system would have to operate on its own right-of-way, but thats a problem too. There's simply not enough available space in the densely populated northeast. Acquiring a new railroad right-of-way by buying up some of the most expensive real estate in the country is simply unaffordable even for the federal government, and relying on a massive application of eminent domain would uproot untold hundreds of families and businesses while still being prohibitively expensive.

Amtrak says a project like that would cost $150 billion and take 25 years—and that's before the inevitable delays and cost overruns.

"There's no conceivable way to generate enough traffic and revenue to cover the capital costs of such a project," said Bob Poole, director of transportation policy at the Reason Foundation (which publishes this blog).

Considering all those constraints, the Acela is actually pretty good. It gets you from city to city without having to sit in traffic or endure a TSA pat-down.

It suffers because there are lots of political reasons for overpromising what high speed rail in America could be. Once you set aside the aspirational rhetoric, the reality is that we're probably never going to have trains that actually run at 200 MPH or even 160 MPH for more than a few miles at a time—no matter how much money Amtrak spends on fancy new railcars.