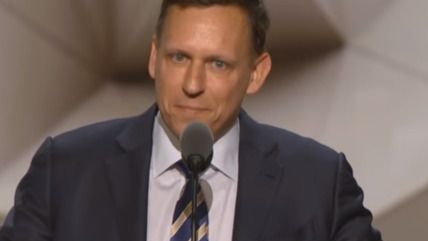 Nine years ago, Gawker ran a blog post headlined "Peter Thiel Is Totally Gay, People." The item rankled Thiel, a billionaire who had co-founded Paypal and invested early in Facebook but had not yet gotten around to publicly acknowledging his sexual orientation, although he had told people close to him.

This week Thiel finally got his revenge as Gawker ceased operations, driven out of business by an invasion-of-privacy lawsuit he financed. Whether or not you mourn the loss of Gawker, a website known for its snarky blend of gossip and journalism, its death does not bode well for freedom of the press.

The lawsuit that Thiel supported involved the professional wrestler Hulk Hogan, a.k.a. Terry Bollea, who claimed to have been mortified by a 2006 video showing him having sex with the wife of his best friend at the time, Tampa shock jock Bubba the Love Sponge Clem. Clem, who arranged the liaison, recorded it without Bollea's knowledge, and in 2012 someone sent the 30-minute video to Gawker, which posted a 100-second excerpt along with a 1,400-word description.

Given Bollea's eagerness to discuss his sexual exploits, including the incident shown in the video, on talk shows and in print, his claim of life-impairing trauma seemed rather implausible. Last March a Florida jury nevertheless awarded him $115 million in compensation for the emotional distress and economic harm the video supposedly inflicted, later tacking on $25 million in punitive damages.

That absurdly disproportionate award, which was even more than Bollea had sought, was a measure of the jurors' disgust rather than any injury he suffered, and it probably will be reduced on appeal. But it already has driven Gawker Media into bankruptcy, leading to its purchase by Univision, which decided to shut down Gawker while keeping the company's other outlets alive.

In a recent New York Times op-ed piece defending his involvement in the Hulk Hogan case, Thiel argues that the threat of ruinous litigation is necessary to protect privacy from media outlets that thrive by violating it. "Gawker violated my privacy and cashed in on it," he writes. "A story that violates privacy and serves no public interest should never be published."

The public clearly was interested in the Hulk Hogan sex tape, which generated more than 7 million page views. Whether the public should have been interested is a different question, and Thiel thinks his answer should be legally enforceable.

Gawker argued that the video, which had been described by other outlets and discussed by Bollea himself, was already a news story, and the first few paragraphs of the accompanying post tried to place it in cultural context, giving the appearance of a purpose other than titillation. The 2007 post about Thiel's sexuality likewise aspired to a serious purpose: questioning the "wrongheaded sense of caution" on this subject among venture capitalists.

I'm not sure I buy these rationales, but I am sure they should be judged by readers, not by courts. Empowering jurors to define the public interest and decide which stories serve it is bound to have a chilling effect even on journalism that Thiel would consider legitimate, because people commonly disagree about such matters.

"Since sensitive information can sometimes be publicly relevant, exercising judgment is always part of the journalist's profession," Thiel says. "It's not for me to draw the line, but journalists should condemn those who willfully cross it."

Notwithstanding his avowed reticence, Thiel is drawing a line by supporting Bollea's lawsuit and offering to help other litigants who believe journalists have violated their privacy. His choice of cases will tell journalists where he thinks the line should be, and they will cross it at their peril.

People who do not like what journalists say about them already can sue for defamation, and they need not win to punish their adversaries for making them uncomfortable. Thiel's amorphous, free-floating right to privacy provides another excuse to exact revenge, with the advantage that truth is no defense.