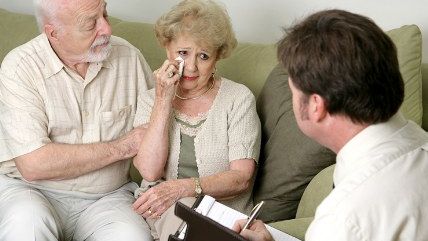 A new federal ruling may add to some confusion on how existing civil rights laws address discrimination claims in situations involving transgender people.

A federal judge with the United States District Court of east Michigan has ruled that a Detroit area funeral home did not engage in illegal discrimination when it fired an employee who was transitioning from male to female.

It's a complicated case (the ruling is 56 pages long) and, of course, far from the last word. In this situation, the federal Religion Freedom Restoration Act (RFRA) and the Supreme Court ruling in the Hobby Lobby case play a role in Judge Sean F. Cox's decision.

The owner of the funeral home, R.G. & G.R. Harris Funeral Home, said that, due to his religion, he believed that a person's sex was a "God-given gift" that could not be changed. When Aimee Stephens, formerly Anthony Stephens, declared that she was going to make her transition, the funeral home would not accommodate her desire to dress as a woman at the workplace. The company had gender-based dress codes and would not accept her switching outfits. So she was fired.

It was the Equal Employment Opportunity Commission (EEOC) who challenged the termination as a violation of federal civil rights laws. This may come as a surprise to those who know that there are no federal civil rights laws that prohibit discrimination against people who are transgender. As we've previously noted about these cases, federal agencies and activists have been trying to expand the scope of a previous Supreme Court precedent that ruled civil rights protections on the basis of sex also prohibit discrimination on the basis of whether a person exhibits stereotypical traits associated with a particular sex.

The judge sided with the funeral home, but for some complicated reasons that will certainly keep the case alive. The judge accepted the invocation of the Religious Freedom Restoration Act (RFRA) here. It's important to understand that the RFRA isn't just blanket permission for somebody to use religion to exempt themselves from the law. When the RFRA is invoked, the government then must prove that it has a "compelling government interest" in regulating certain behaviors, but also that their method of doing so is the "least restrictive means" available. The court "assumes" the first part of this claim is true (libertarians may disagree), but when we get to the "least restrictive means" test, here's what Cox had to say:

Nevertheless, the EEOC has failed to show that application of the burden on the Funeral Home, under these facts, is the least restrictive means of protecting employees from gender stereotyping. If a least restrictive means is available to achieve the goal, the government must use it. This requires the government to show a degree of situational flexibility, creativity, and accommodation when putative interests clash with religious exercise. It has failed to do so here. The EEOC's briefs do not contain any indication that the EEOC has explored the possibility of any accommodations or less restrictive means that might work under these facts. Perhaps that is because it has been proceeding as if gender identity or transgender status are protected classes under Title VII, taking the approach that the only acceptable solution would be for the Funeral Home to allow Stephens to wear a skirt-suit at work, in order to express Stephens's female gender identity. …

The EEOC claims the Funeral Home fired Stephens for failing to conform to the masculine gender stereotypes expected as to work clothing and that Stephens has a Title VII right not to be subject to gender stereotypes in the workplace. Yet the EEOC has not challenged the Funeral Home's sex-specific dress code, that requires female employees to wear a skirt-suit and requires males to wear a pants-suit with a neck tie. Rather, the EEOC takes the position that Stephens has a Title VII right to "dress as a woman" (ie., dress in a stereotypical feminine manner) while working at the Funeral Home, in order to express Stephens's gender identity. If the compelling interest is truly in eliminating gender stereotypes, the Court fails to see why the EEOC couldn't propose a gender-neutral dress code as a reasonable accommodation that would be a less restrictive means of furthering that goal under the facts presented here. But the EEOC has not even discussed such an option, maintaining that Stephens must be allowed to wear a skirt-suit in order to express Stephens's gender identity. If the compelling governmental interest is truly in removing or eliminating gender stereotypes in the workplace in terms of clothing (i.e., making gender "irrelevant"), the EEOC's chosen manner of enforcement in this action does not accomplish that goal.

This Court finds that the EEOC has not met its demanding burden. As a result, the Funeral Home is entitled to a RFRA exemption from Title VII, and the body of sex-stereotyping case law that has developed under it, under the facts and circumstances of this unique case

The TL;DR version: If the EEOC wants to eliminate gender stereotypes in the workplace, then why didn't it propose the funeral home adopt a gender-neutral dress code? That would be less intrusive than requiring the funeral home owner compromise his religious beliefs. Mind you, the owner might have refused that compromise as well, and from a libertarian perspective, a federal agency overseeing a funeral home's uniform choices is hardly an appropriate solution. But the point here is that the EEOC didn't even try other solutions, and that's where they run afoul of the RFRA.

This nuance—the idea that there may be solutions other than the government telling people what to do—is of course lost in the responses. From the Detroit Free Press:

ACLU attorney Jay Kaplan, who initially interceded on her behalf, believes it was discrimination disguised as a religious view. And Cox's decision, he said, will only allow more such workplace discrimination to take place.

"This case represents the dangerous slippery slope. Any individual employer can cite their own religious beliefs to discriminate," Kaplan said, noting the funeral home is not a religious organization, but strictly a business. "It's not a religious funeral home. It serves all denominations, and yet because the owner professed a particular viewpoint toward transgender people, he can willfully violate civil rights laws? … It's a highly flawed decision. … This is now open season to justify discrimination by individuals and businesses against various groups of people."

"This is a reckless ruling against a woman who was fired simply because she is transgender," said Human Rights Campaign Legal Director Sarah Warbelow. "Judge Cox's deeply disappointing decision has the possibility of setting an incredibly dangerous precedent that purported religious beliefs can be used as an excuse to violate non-discrimination laws. It has the potential of opening a Pandora's box of discrimination against a wide range of vulnerable communities. We are incredibly concerned about the implications."

Note that these responses completely ignore what Cox actually said in the ruling.

Read the ruling yourself here.