A Welcome Victory in the Fight Against Asset Forfeiture

The California Assembly approves one of the most significant civil libertarian reforms of the legislative session. 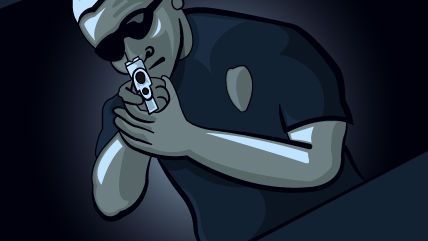 The California Assembly on Monday approved one of the most significant civil-liberties reforms of the legislative session. Remarkably, the bill—to put limits on the controversial practice of civil asset forfeiture by police agencies—had no major opposition after legislators and law-enforcement groups pieced together a compromise that seems to genuinely satisfy both sides. It passed by a 67-7 vote.

Asset forfeiture is the practice by which police agencies grab the assets—cash, cars, boats, homes—of suspected criminals. Designed originally to fight drug kingpins, asset forfeiture has morphed into a means by which agencies bolster their budgets. The overwhelming percentage of forfeiture cases involve people who have not been convicted or even accused of a crime.

In one legal case, an agency took away a person's car because it was used in the commission of a crime, even though the owner wasn't involved in the crime.

Senate Bill 443 by Sen. Holly Mitchell, D-Los Angeles, was designed to stop the types of abuses mentioned above, without hindering the ability of police agencies to grab the illicit proceeds of drug dealers. It mainly requires police to gain a conviction before taking a person's property. The bill was moving ahead with strong bipartisan support last year, but then law-enforcement lobbyists derailed it the week before a final Assembly vote. They argued primarily that the reforms would cost their agencies a significant amount of money that's used for crime fighting and that passage of the reform would stifle their ability to target drug kingpins.

Mitchell revived the bill this year and recently hammered out a compromise. The California Police Chiefs Association and other law-enforcement groups dropped their opposition. In a statement, the chiefs' association lauded "a compromise that enhances safeguards on Californians' rights, while ensuring law enforcement has the tools necessary to combat the gangs and drug traffickers damaging our communities." Officials with the American Civil Liberties Union of California seemed equally pleased with the compromise.

California actually imposes some of the toughest restrictions on asset forfeiture in the nation. Among other restrictions, the law requires a conviction, for instance, for forfeiture when the value of the property is under $25,000. But problems remain because state and local agencies circumvent the state's law by partnering with federal agencies under a program known as "equitable sharing." The partnership lets them operate under looser federal standards—and then the locals split the forfeiture proceeds with the federal agencies.

The bill—in its original and amended form—limits the ability of California agencies to do an end run around state law. "The bill would prohibit state or local law enforcement agencies from transferring seized property to a federal agency seeking adoption by the federal agency of the seized property," according to SB443's official summary. "The bill would further prohibit state or local agencies from receiving an equitable share from a federal agency of specified seized property if a conviction for the underlying offenses is not obtained … ." The local and state agencies could still participate in joint projects with the federal government and could still receive proceeds—but only if they first secured a criminal conviction in the underlying case.

Under the compromise, however, state officials would not need a conviction to seize "cash or negotiable instruments" above $40,000, whereas the original bill would have required a conviction for all cash seizures. Eighty percent of cash seizures are for less than $40,000, so the compromise protects the vast majority of people who have their cash seized. The average seizure in California is slightly above $5,000. Police agencies say the larger cash amounts usually are the result of drug deals, so the agreement makes sense to both sides. Furthermore, the bill still requires a conviction for the taking of property valued at more than $40,000, such as houses or cars.

That latter point is significant. In one highly publicized case in Anaheim, officials tried to take a commercial building valued at $1.5 million from a couple after one of its tenants was accused of selling $37 in marijuana. The authorities dropped that forfeiture case amid bad publicity, but SB443 is designed to halt those types of takings—where, say, a valuable property is seized simply because a drug crime might have been committed on the premises. The legislation also requires additional reporting from agencies that use the forfeiture process.

The goal is to stop what critics refer to as "policing for profit." A study from the Drug Policy Alliance reported that some cities "were found to be prioritizing asset forfeiture over general public safety concerns, like response times and sufficient patrol officers." The report referred to "multiple instances of cash grabs by law enforcement being incentivized over deterring drug sales, wherein police wait until a drug sale concludes and then seize the cash proceeds of the sale rather than the drugs, as drugs must be destroyed and are of no monetary value to law enforcement."

As Reason's Scott Shackford pointed out, "As California cities dealt with drops in revenue during the recession over the past decade … participation in the federal program skyrocketed." But reformers say law enforcement priorities should be shaped by public-safety concerns rather than monetary goals.

Presumably, the final deal will still let agencies grab the dollars of real drug kingpins, while leaving the rest of our property alone—or at least requiring that residents are convicted of wrongdoing before losing it. Both sides believe the right balance has been struck. We'll see if that's enough to move the bill through the rest of the legislative process and secure the governor's signature, but this was a major victory reformers.

This article originally appeared at CalWatchDog.org.