Cops and prosecutors claimed Anthony Novak committed a felony when he created a Facebook parody. 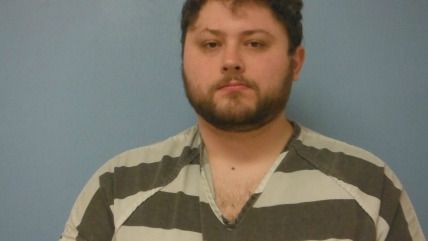 Last Thursday an Ohio jury acquitted Anthony Novak, a 27-year-old man whom Parma police arrested last spring for making fun of them. After hearing one day of testimony, the jurors unanimously concluded that Novak did not "disrupt public services," a felony punishable by up to 18 months in prison, when he created a parody of the Parma Police Department's Facebook page.

Novak's fake Facebook page, which changed the department's slogan from "We know crime" to "We no crime," included a job notice saying that anyone who passed a "15 question multiple choice definition test followed by a hearing test" would be "be accepted as an officer" but that the department "is strongly encouraging minorities to not apply." The Toledo Blade says the page "suggested it would be illegal to help the homeless for three months" and outlined "ways sex offenders could have their names taken off the state sex offender database." There was also a notice saying the department was offering teenagers free abortions "using an experimental technique discovered by the Parma Police Department" in "a police van in the parking lot at Giant Eagle," a local grocery store.

When they arrested Novak in March, Parma police complained that his jokes were "derogatory" and "inflammatory." After Novak was indicted in April, a department spokesman said, "We believe the material that Novak posted on the fake account crossed the line from satire to an actual risk to public safety."

During Novak's trial the prosecution said the problem was that the parody, which was online for less than a day and attracted fewer than 100 followers, generated calls to the police department: all of 10 in 12 hours. Apparently the jury did not think that call volume was so overwhelming that it prevented police from attending to more important duties. "They claimed that those calls disrupted their dispatch function," Novak's lawyer, Gary Vick, told the Cleveland Plain Dealer, "even though the function of dispatch is to take calls and deal with the public."

Novak spent three days in jail before he was released on bail of $7,500, and police seized his electronic devices, including a laptop computer and two game consoles. "I feel totally relieved," he told The Plain Dealer on Friday. "I didn't realize how much stress this was creating in my life until it was over. I was pretty much nervous for five months."

Novak plans to sue the police department and the Cuyahoga County Prosecutor's Office for violating his First Amendment rights. "I absolutely want them to pay for this," he said. "The whole ordeal was absolutely ridiculous. They shouldn't be allowed to get away with something like this." Elizabeth Bonham, staff attorney with the ACLU of Ohio, thinks Novak has a strong case. She told The Plain Dealer Novak's actions were "so clearly protected by the First Amendment that the criminal proceedings shouldn't have even come this far."

Addendum: In a similar case last fall, the city of Peoria, Illinois, agreed to settle a lawsuit brought by Jon Daniel, who was arrested on suspicion of impersonating a public official after he set up a parody Twitter account that made fun of Mayor Jim Ardis. Unlike Novak, Daniel was never actually prosecuted, because the local state's attorney recognized that he had not broken the law. Daniel nevertheless got $125,000 for his trouble, which suggests Novak's payout could be substantially higher.