NY Daily News Admits "We Were Wrong" About Stop and Frisk

Editorial board concedes that the heated rhetoric around curtailing unconstitutional stops did not lead to an end of effective policing. 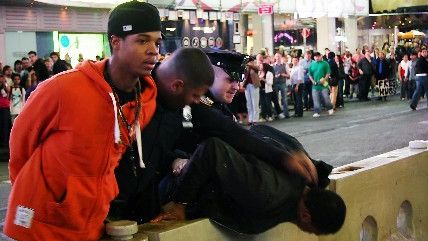 The New York Daily News — one of Gotham's two daily tabloid newspapers that provide excellent sports coverage and front pages designed to titillate and/or terrify — has issued a mea culpa regarding its earlier stance on the NYPD's now-discontinued use of the controversial tactic known as "stop and frisk." The re-examination of comes in the form of an op-ed headlined, "We were wrong: Ending stop and frisk did not end stopping crime."

Almost three years to the day since a federal judge declared the city's particular method of deploying stop and frisk to be unconstitutional, the paper's editorial board has conceded they were misguided when it previously spared no hyperbole in writing that Judge Shira Scheindlin's "outrageously predictable, dangerously misguided ruling" was a "195-page scream of self-righteous ideology" which proved she believed "that the NYPD spits on the constitutional rights of New Yorkers."

Following Sheindlin's ruling, I wrote for Reason that the NYPD's use of stop and frisk amounted to generalized suspicion with no accountability. All officers had to do was check one of 10 vaguely-defined "suspicious behaviors" on a UF-250 form. One of the check-boxes referred to "furtive movements," which apparently was a popular choice among officers using stop and frisk:

More than 50% of all stops in 2011 cited "furtive movements" as a cause, which can include fidgeting, putting hands in pockets, and turning the other way when police are approaching. That is to say, the definition is so arbitrary as to be meaningless, leaving police with no reasonable limits on their authority to detain citizens at any time.

In some cases, the very act of being stopped and frisked changes the nature of the crime. During police stops, officers routinely order citizens to empty their pockets, sometimes bringing marijuana into plain view and triggering an arrest. Possession of marijuana in New York results in a $100 fine, but once it's in plain view, it becomes a Class B misdemeanor, punishable with jail time.

So how did the Daily News go from saying Scheindlin was "recklessly playing with fire" and her ruling "threatens to push the city back toward the ravages of lawlessness and bloodshed" to admitting, "New York is safer while friction between the NYPD and the city's minority communities has eased"?

The NYPD began scaling back stops under Kelly before Scheindlin's decision and accelerated the trend under Commissioner Bill Bratton. As a result, the number of stops reported by cops fell 97% from a high of 685,700 in 2011 to 22,900 in 2015.

Not only did crime fail to rise, New York hit record lows.

The downward march has continued this year — a marked contrast to crime spikes in many major American cities.

Watch the 2013 Reason TV doc I produced on NYC's use of stop and frisk below: