If not for Federal Aviation Administration meddling in supersonic flight innovation, we could zip around the world in a fraction of the time. 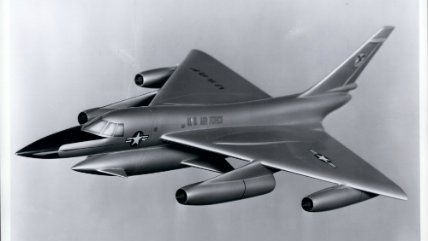 Flying is the worst. With each commercial flight, Americans get groped, jostled, cramped, and corralled like cattle. But the Transportation Security Administration (TSA) isn't the only government agency that needlessly adds to our jet-setting woes. If not for Federal Aviation Administration (FAA) meddling in supersonic flight innovation, we could zip around the world in a fraction of the time.

Five decades ago, the future of aerospace engineering was incredibly bright. As international rivals raced to put humans into space, scientists applied new technologies to improve the speed, comfort, and safety of terrestrial air travel. The U.S.-based McDonnell Douglas and Boeing spearheaded the era of commercial jet transportation with the introduction of the Douglas DC-8 and Boeing 707 in the late 1950s. Our European friends got into the aviation game in the 1970s with the Airbus A300, while Lockheed Martin followed up with the L-1011 TriStar around the same time.

With competition and research came innovation. By the mid-1970s, engineers were building "supersonic" aircraft capable of traveling well above 767 miles per hour (mph), the speed of sound. In one decade, the top airplane speed on record more than doubled, from 698.5 mph in 1952 to 1,665.9 mph in 1962. By 1976, U.S. military pilot Eldon W. Joerz managed to navigate the Lockheed SR-71 "Blackbird" to a blazing 2,193 mph, almost three times the speed of sound.

Commercial crafts never traveled quite that fast. But supersonic civilian flight was indeed once a reality. From 1976 to 2003, passengers in a hurry could hop on a majestic Concorde supersonic airliner in London's Heathrow Airport and arrive in New York City in a little over three measly hours. Try the same on a boring old Boeing 747 and you're looking at a travel time of at least 7 or 8 hours.

Very few of us have enjoyed the thrill and convenience of a supersonic flight. This is partly due to economics: Both the Concorde (1,350 mph) and the Soviet Union's Tupolev Tu-44 (1,200 mph) faced early retirements for financial reasons.

But this does not explain why top airplane speeds have lagged behind for so many decades. Today, most airlines cruise at altitudes well below the speed of sound, with a standard Boeing 747-B clocking in at a ho-hum 570 mph cruising speed. My Mercatus Center colleagues Eli Dourado and Michael Kotrous recently dug into airspeed data compiled by Fédération Aéronautique Internationale (FAI), an international sports aviation measurement and standard-setting body. Their finding: Innovation in air travel speeds came to a grinding halt after Joerz's still-unbroken record-setting feat in 1976.

You can thank the FAA for this continued mediocrity in air travel. In 1973, amid ample developments in supersonic flight, the FAA bizarrely decided to prohibit supersonic travel (SST) over the US. Why? When an aircraft travels faster than the speed of sound, it generates shock waves that become compressed into one super-loud "sonic boom." The FAA and other civilian activists were concerned about the potential damage that SST flights could do to the environment or to civil infrastructure.

Unfortunately, evidence-based policy-making did not guide the FAA's supersonic ban. Knee-jerk techno-skepticism did.

When the development of the Concorde was announced in 1962, a group of anti-SST scientists and concerned laypeople rallied to stop the march of progress in aviation. A Swedish aeronautics engineer named Bo Lundberg provided much of the academic antagonism, publishing articles through his aviation research institute suggesting that the public would reject the nuisance of SST sonic booms.

A British primary-school teacher and environmentalist named Richard Wiggs also activated the public in an anti-SST campaign. His Anti-Concorde Project took out full-page ads in papers of record, alarming readers that the "sonic bangs" would be "by far the loudest noise they have ever heard." His other large argument—that British and French taxpayers should not have been compelled to subsidize the development of the Concorde—will be more sympathetic to Reason readers. But unfortunately, the misleading and paranoiac public-outrage campaign disseminated by the Anti-Concorde Project and the allied Citizens League Against the Sonic Boom served as the catalyst for innovation-killing policies.

Obviously, very few of us would tolerate aviation technology that—elegant and rapid though it may be—ripped holes through homes and shattered windows with each passing flight. Supersonic flights that merely made annoying, but non-destructive, booms every now and then might generate some heated discussion, but that's something that more people could live with. What is imperative is that scientists and policymakers have enough time to sift through factual evidence before assessing what level of risk or downside the public is willing to tolerate.

To their credit, the FAA did team up with NASA and the U.S. Air Force to preemptively test and measure the outcomes of SST from 1958 through 1968. Contrary to the city-shattering rhetoric emanating from the anti-SST crowd, the sonic booms generated by SST over land in the U.S. were predictable and mild. In several of the tests, people down below did not notice that anything was amiss at all. In one test over St. Louis in 1962, only about 35 percent of the interviewees were even mildly annoyed by the sonic booms at all and less than 10 percent thought about registering a formal complaint (only 1 percent bothered to actually do it).

In another series of tests over Oklahoma City in 1964, the scientists carefully selected a representative sample of buildings to observe the effects of regular SST flights on day-to-day life for half a year. A surprising 73 percent of the participants felt they could live with the everyday effects of SST travel without any issue. Around 40 percent of respondents said they believed SST caused structural damage to their home, but the scientists were unable to find physical evidence for this themselves. Perhaps the participants were simply imaging things, or perhaps the scientists were not being as judicious as they should in finding damage. More research was needed.

To better understand the specific structural effects of SST travel, scientists constructed an entire miniature town of fake "houses"—like those atomic testing sites so favored in Hollywood movies— at the White Sands Missile Range in New Mexico in 1964 and 1965 to get an inside peak into just how well those windows and tiles would hold up. Sixteen types of buildings were created, fitted out with standard construction materials of varying quality to get a better idea of how homes of all income brackets would fare. After almost 1,500 booms, the results were broadly encouraging: plasters of all kinds were just fine, glass only chipped when poorly mounted (and not by much), and stucco held up. And if you were worried about the chickens, fear not—sonic booms do not negatively affect egg hatchabliity.

Alas, paranoid conjectures about crumbling cities and bursting eardrums proved more salient to policymakers than measured data on plasterboard resiliency. The FAA ban on supersonic flight over the U.S. has persisted to this day, and with it, our continued misery in the skies.

But things could be changing. The Denver-based start-up Boom Technology is developing aircraft to travel at speeds up to 1,451 mph—twice the speed of sound. Airspace veteran Virgin is teaming up with Boom to revive the London-New York SST route blazed by Concorde so many decades ago. And speaking of Concorde, its passionate fans in Club Concorde just might pull off their crazy dream of crowdfunding enough money to put the beloved beauty back in the sky. Japan and NASA are jumping into the heady world of SST travel as well.

Yet all of this capital investment will be for nothing if policy remains the same. Allowing SST over U.S. territory would do a lot to improve the profitability odds for this historically-challenging market. The FAA has an opportunity to open the gates to major innovation by making one small policy change: Remove the outright ban on supersonic travel. Instead, designate a minimum noise level that entrepreneurs must target to be airworthy. That's it!

The agency has considered this policy before, but remained unfortunately stubborn in a 2008 statement: it will not issue a noise standard until the "noise impacts of supersonic flight are shown to be acceptable." But this Kafkaesque stance is virtually no different from an outright ban: entrepreneurs can't show which noise impacts of SST flight are "acceptable" without have a definition of "acceptable" to shoot for.

Fortunately, as technologists and even policymakers begin to see airspace as another platform for innovation, the appetite for "permissionless innovation" policy-reforms is growing. The FAA could be a champion for the next great American industry as soon as it decides to change.