Massachusetts Voters Could Have Egg on Their Faces

Ballot measure will decide in November whether to impose unwise, harmful, costly, and unconstitutional standards for raising a host of livestock animals. 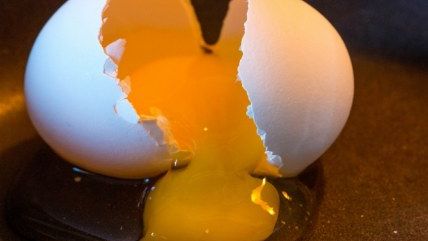 Voters in Massachusetts will decide this November whether to impose unwise, harmful, costly, and unconstitutional standards for raising a host of livestock animals. Critics have rightly issued dire warnings.

"This November, without even realizing it," writes veterinarian Dr. Nancy Halperin, "Massachusetts voters may be voting to ban importation of eggs, veal, and pork."

The purpose of the state's ballot measure is to phase out animal confinement measures that supporters of the initiative claim "threaten the health and safety of Massachusetts consumers [and] increase the risk of foodborne illness" in the state.

The Massachusetts law effectively mimics the California egg law, but also adds veal calves and pigs to the mix. The California law is the subject of an ongoing lawsuit filed by Missouri and other states. The case was appealed in 2015, after a federal judge ruled the plaintiffs lacked standing. I've previously urged livestock farmers—who undoubtedly have standing—to seek join the lawsuit.

The proposed Massachusetts law would make it "unlawful for a business owner or operator to knowingly engage in the sale within the Commonwealth of Massachusetts of any" eggs in the shell, veal, or pork (the latter two in meat form, rather than in, say, a can) if the business owner or operator "knows or should know" that the animal in question "was confined in a cruel manner." The proposed law goes on to define cruel conditions as ones that "prevent a covered animal from lying down, standing up, fully extending the animal's limbs, or turning around freely."

If voters in my home state make the mistake of adopting the law, a federal court should strike down the law as an unconstitutional power grab on the part of Massachusetts. The state may well be allowed to regulate many facets of agriculture within its borders. But it has no such authority to regulate the way livestock is raised in other states.

In a 2014 piece on a related California egg law, I explained why it's both problematic and unconstitutional for one state to dictate standards for others.

"If California may dictate standards for raising animals in other states, then any state—in keeping with the hypothetical, let's say Iowa—could pass a law that prohibits, say, farmers from raising crops in drought-stricken areas," I wrote. "The justification? It's not a good use of water, and water should be conserved (rather than exported in the form of produce) in times of drought. Since California is in the midst of a decade-long drought, then that rule would effectively bar California crops from Iowa. If a handful of other states followed, then the rule could doom California agriculture—including, for example, the state's enormous wine industry."

But federal courts seem loathe to tell states they can't do something unconstitutional unless the court also seeks to placate agricultural control freaks by assuring these busybodies that, really, their concerns lie in an area that's preempted by federal law. Such was the message from successive federal courts in California in recent years—and in a related 9-0 Supreme Court ruling—in separate lawsuits that overturned that state's foie gras ban and its rules governing the slaughter of non-ambulatory pigs.

In addition to these defects, the law is unconstitutionally vague and unenforceable. For example, how could a Massachusetts grocer know if the eggs she buys from one of tens of thousands of farms in Mexico or Iowa, the veal he buys from China, or the pork he buys from North Carolina was raised in conditions that satisfy the Massachusetts standards? What's more, how could the Commonwealth of Massachusetts, which would enforce the law and issue fines of $1,000 under it, know whether the hen that laid a particular egg was raised in conditions that satisfy the state's standards? Neither can know, and Massachusetts has neither the authority nor the right to inquire. This makes the law an unenforceable nuisance.

In addition to being unconstitutional, the proposed Massachusetts law could actually be counterproductive, in that it could harm the living conditions of livestock in three ways.

First, the effect of the Massachusetts law would be to require that all eggs sold in the state be cage-free, meaning the hens that laid the eggs did not live in cages. While that sounds lovely, it comes with serious drawbacks. First, raising cage-free hens is more expensive. Those costs will be passed along to consumers.

That's made the proposed Massachusetts law a lightning rod for some unlikely allies. Anti-hunger advocates, who oppose measure that would raise the cost of eggs, a cheap source of protein, have joined with agricultural interests to oppose the law. Daniel Fishman, a critic of the law who hails from my hometown, Beverly, wrote in a Boston Globe piece that the proposed law is "a tax on the poor to subsidize the eating habits of the wealthy."

Second, as an excellent recent New York Times piece by David Gelles describes, "cage-free" hens are typically raised in aviaries—large, cramped egg-laying warehouses in which hens are more likely to attack, kill, and eat one another, and hens and livestock workers are more likely to become sick.

"In short, liberating hens from cages—and holding them in aviaries—doesn't necessarily make them, or the workers who handle them, any healthier," writes Gelles.

Finally, the Massachusetts law practically begs for measures to ensure ironclad secrecy on the part of livestock operations, and ignorance on the part of state merchants. A business owner in Massachusetts can't know, or shouldn't know—the legal standards for culpability under the Massachusetts law—whether a particular egg, veal calf, or pig was raised in "cruel" conditions, particularly if the farm where the animal was raised is shielded by laws in other states that keep livestock conditions secret.

Such awful laws, known as "ag-gag laws," exist in several states. I'm so opposed to ag-gag laws that I recently joined with more than a dozen fellow food law faculty members to sign on to a brief in support of the Animal Legal Defense Fund, PETA, the ACLU, and other groups that are challenging Idaho's ag-gag law.

Livestock animals we raise for food deserve to be treated with care and respect. Of course they do. And those who would mistreat such animals—in ways that break laws or even in ways that comply with them—deserve to be exposed and warrant both our contempt and the loss of our business.

But laws also must also ensure that livestock operations can continue to operate. Imposing needless, costly, counterproductive, and unconstitutional burdens on our nation's livestock farmers will harm consumers, farmers, and animals alike.