During a birthday party for a 5 year old while serving a 10-year-old warrant. 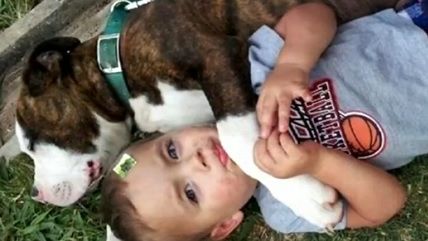 Police in Wynnewood, Oklahoma arrived at the home of the Malones with a warrant for someone who had lived at the rental residence 10 years earlier, according to local TV station Fox 25.

While there, an unidentified police officer took what Fox 25 described as a high-powered rifle from his vehicle and shot Opie, described as a bulldog/pitbull mix, multiple times, including at least twice in front of children who were having a birthday party, according to Vicki Malone, the mother. Police insist the dog came around the house to menace police, but Fox 25 reports it obtained video that showed the dog lying on the ground with a bullet wound in its head near the fence, not near the house as police insisted.

The police chief also admitted to Fox 25 that they knew the Malones were the most recent residents and that a number of people had moved in and out of the house. But, said Ken Moore, police "had to start somewhere," and the warrant gave them the authority to enter the Malone property without their permission.

For her part, Vicki Malone says she never saw any warrant. Eli, the five-year-old whose birthday party police crashed to shoot and kill his dog, told Fox 25 he was sad the police did not apologize for killing his dog.