But How Would You *Know* if LP Prez Nominee Gary Johnson Used Pot?

The short and honest answer: Only if he told you. Not all pot users are stoned out of their gourds all the time. 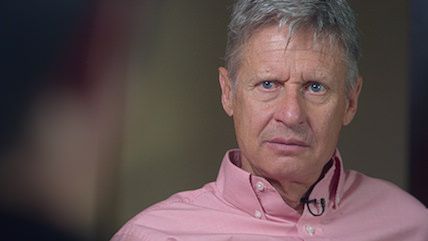 [Press Club President] Thomas Burr: …Do you worry about being perceived as a spoiler to the major party candidates such as Ross Perot in '92 or Ralph Nader in 2000?

Gary Johnson: I will lose no sleep if that is the label given to me, and I will reiterate; this is a party that needs crashing.

Mr. Burr: Governor Johnson, we've had several questions submitted about this, so I'm just going to ask it. When was the last time you smoked or ingested marijuana?

Mr. Johnson: I did this about two months ago, it's been about two months. And when you tell the truth, really, you don't have anything to fear. I've always maintained that you shouldn't be on the job impaired. Well, as of two months ago, really this is a 24/7 job running for president of the United States. And as president of the United States, that is also a 24/7 job. So, in my lifetime, I think I have more than demonstrated my ability to be self disciplined. I haven't had a drink of alcohol in 29 years. I wasn't an alcoholic, it had everything to do with rock climbing and the immediacy of rock climbing and being the best that you could possibly be. But this is the truth component that I think is really also lacking in politics.

Who would know that I ingested marijuana products two months ago? My best friends. And if I'd have said, "Hey, I don't use it, or I haven't used them," my best friends would consider me a hypocrite. And I think hypocrisy is the one unforgivable in life. Doing one thing and saying another. (Applause)

There are at least two remarkable things in the exchange above.

First is the simple, direct honesty of a politician admitting not that he used pot way, way, way back in his student days when he didn't really inhale and then he never tried it again but that he was a regular, responsible user of a mild intoxicant whose legalization is supported by 58 percent of adult Americans.

God, when you put it that way, why is any courage necessary? Legalizing pot is wildly popular and getting more so. Yet few pols will cop to using. Indeed, it is nothing less than sad-making that well into the 21st century, so many officials are afraid to acknowledge any sort of illicit drug use (unless they are doing so as part of a mea culpa or to humble-brag that they've been clean and sober for X number of years). The prohibition of marijuana isn't simply a personal choice, it's an institutional decision that undergirds so much that is wrong with the war on drugs, criminal justice, education, and even foreign policy. It's progress that, as Jacob Sullum notes, that all four presidential candidates (Hillary Clinton, Donald Trump, Jill Stein, and Johnson) support letting states decide the legal status of pot. But even as it seems likely that California and other states will legalize recreational pot use in November, we've got miles to go before we can sleep, safe and secure in knowing that the drug war is actually over.

The second remarkable thing? Johnson, a former two-term Republican governor of New Mexico, is normalizing the image of a pot user like no politician before him. Sure, he may seem, as John Stossel contends, a bit "sleepy" at times but it's not because he's high all the time. It's because he's a rock climber and a one-time competitive skier and from Colorado and New Mexico, places filled with folks who talk and sound just like him regardless of use. Among the most-important barriers to widening the range of legal intoxicants is the persistent notion that people who use "bad" or "illicit" drugs are different from you and me. At various points in its long and tortured history, marijuana has been associated with various out-groups, such as Mexicans, blacks, musicians (jazz men, rockers, and now rappers), youth, et al. Johnson helps to flip that script by being generally and genuinely presentable. He's not the second coming of Scooby-Doo's Shaggy or a Cheech & Chong character. He speaks eloquently about the control he exercises over his drugs of choice and his own body. We should all look so fit at 63 years old.

Ending the war on pot—or even the larger war on drugs—won't solve all or perhaps even that many of America's problems. But it will make this country a better place to live, and a fairer one to boot. That it's taking us well into the 21st century is to our collective shame. And that it's a third-party candidate leading the charge is to the shame of the Democrats and Republicans, even as that backward-looking sluggishness helps to explain why people are evacuating those parties as if the cops just showed up at the front door.