All four say states should be free to legalize pot, but only two say that's a smart policy. 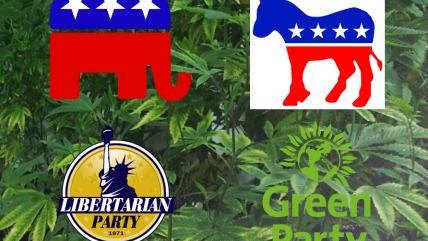 A recently released draft of the Democratic Party's platform calls for federal accommodation of state-licensed marijuana businesses. As I explain in my latest Forbes column, that's quite a turnaround from the last time the party's platform discussed marijuana:

The last time the Democratic Party's platform mentioned marijuana was in 1984, when it cited "25 million regular abusers of marijuana" and "15,000 tons of marijuana" entering the United States each year as "clear evidence that we are losing the effort overseas to control the production and transshipment of…dangerous drugs." The draft for this year's platform mentions marijuana half a dozen times, and the context is notably different:

"We believe that the states should be laboratories of democracy on the issue of marijuana, and those states that want to decriminalize marijuana should be able to do so. We support policies that will allow more research on marijuana, as well as reforming our laws to allow legal marijuana businesses to exist without uncertainty. And we recognize our current marijuana laws have had an unacceptable disparate impact, with arrest rates for marijuana possession among African Americans far outstripping arrest rates among whites, despite similar usage rates."

Assuming something like that language is included in the final version of the platform, the Democrats, after three decades of silence on the subject, have gone from advocating an escalation of the war on weed to facilitating more tolerant approaches, including outright legalization. What's more, every presidential candidate you are likely to see on your ballot this November agrees that states should be free to legalize marijuana—a remarkable development attributable not only to the landmark 2012 initiatives in Colorado and Washington but to a concomitant shift in public opinion nationwide.

Once you get beyond the question of how the federal government should respond to states that legalize marijuana, there are some notable differences on drug policy among the four parties with wide ballot access. Here is a summary of where they stand, arranged from least to most tolerant.