Chief arranged for de-escalation training and got rid of bad cops. 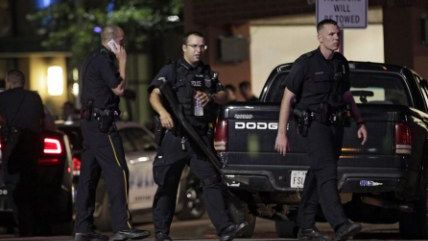 This morning Dallas Police have identified the man they believe responsible for shooting officers at protests yesterday, killing five. His name is Micah Xavier Johnson, of Mesquite, a suburb to the east of Dallas. He was killed by an explosive attached to a police bomb-defusing robot when he refused to surrender. Johnson reportedly said he wanted to kill police officers, specifically white police officers.

He also said he was not connected to the Black Lives Matter movement and was doing this on his own.

The city Johnson decided to target, Dallas, is notable for how it has worked hard to reform its policing practices. Yesterday, before this attack happened, I made note of criticism that Baltimore's alleged reform of use of force policies appeared to be more like shuffling language around rather than promising any sort of practical changes or consequences.

In Dallas, though, they didn't stop with just updating policies. They actually trained and put policies into practice to keep officers from overreacting during encounters with citizens. Police Chief David Brown has been at the forefront of pushing for change, even when police unions and even the local press resisted.

Former Reason Editor Radley Balko, author of Rise of the Warrior Cop: The Militarization of America's Police Forces, was acknowledging Brown's responses back in 2014:

A number of older and retired police officers and police trainers I've interviewed over the last few years say that lethal force training has undergone a decided shift in emphasis over the last decade or two. Where the training once emphasized deescalation and conflict resolution, it now tends to be more about how to justify an use of force incident after the fact. There's also an emerging narrative from some law enforcement groups that cops are too hesitant, and aren't killing people often enough. The cops and trainers I've spoken to are worried about this version of events.

That Brown seems to share those concerns about lethal force is a point in his favor. Brown also hasn't hesitated to fire cops who show poor judgment. The cop who shot the unarmed carjacking suspect has been fired. In 2011, Brown fired a cop caught kicking and macing a handcuffed suspect. Brown then praised the supervisor who reported the incident, and warned any officers thinking of retaliating against him for piercing the Blue Wall of Silence.

Brown fires bad cops, independently of whether they get convicted of crimes.

Dallas has since seen a decline in excessive force complaints and officer-involved shootings. At the same time, they've also seen a drop in arrests and murders. BuzzFeed notes that deadly police shootings in Dallas have decreased in recent years, down to 11 last year. This year, the police believe they've only fatally shot one person in Dallas so far. If true, that very much makes Dallas an outlier. Current independently gathered data on fatal shootings by police shows that officers have shot 509 citizens so far this year, putting them slightly ahead of last year's pace. According to the Washington Post, police have killed 27 more people this year than at this same time last year.

BuzzFeed notes that Dallas has also seen drops in arrests and murders recently (though numbers climbed last year, as they had in several large cities). I wouldn't necessarily associate the two given the national general trend of crime dropping over the past decade.

The numbers do serve as an indictment to the idea of the Ferguson effect, that increased scrutiny of police behavior and increased carefulness by police officers emboldens criminals and leads to more crime. Prior to the attack, the Dallas protest by Black Lives Matter supporters appeared to be completely peaceful, and there were even photos posted on social media of protesters posing with officers.

Let's hope that this violence doesn't result in a push to try to get Brown to rethink his leadership style and turn Dallas into a place where police look for reasons to justify their behavior rather than to focus on better community policing.