If You Want the Government to Forgive Your Criminal Mistakes, Run for President

Intent matters, but sometimes only when authorities decide it does, like if it turns out you're Hillary Clinton. 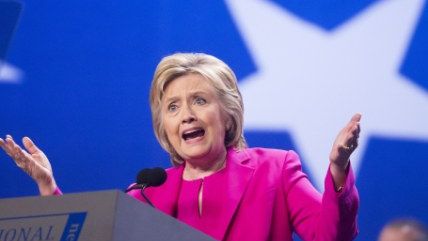 We know today that the FBI, despite determining that Hillary Clinton had more than a hundred emails on her private server that had information that was classified at the time, and despite her publicly making claims otherwise, has decided that she should not face federal prosecution.

The FBI determined that clearly seriously poor decisions were made here, describing the handling of classified information under Clinton's administration as Secretary of State as "extremely careless." But despite the violations of the law, the FBI determined no "intentional and willful mishandling" of classified information, and thus decided that an attempt to prosecute probably would not succeed.

How lucky for her. If only the same could be said for the rest of us. The Clinton case can be seen as an example of the concept of mens rea in action. Mens rea is the legal concept that in order to convict somebody of a crime, prosecutors should be required to show that the defendant knew he or she was doing something wrong.

The FBI's analysis may well be accurate: Maybe they had no intent to willfully mishandle information. But it's important to understand that there are many federal laws where mens rea is not considered when prosecuting somebody for violation of the law. Clinton is getting the mercy of a Justice Department that, in her case, cares about her intent. The rest of us don't get such of a pass, even in somewhat similar situations. Glenn Greenwald notes that those with lesser connections who get accused of mishandling classified information see much different responses from this administration:

NSA whistleblower Tom Drake, for instance, faced years in prison, and ultimately had his career destroyed, based on the Obama DOJ's claims that he "mishandled" classified information (it included information that was not formally classified at the time but was retroactively decreed to be such). Less than two weeks ago, "a Naval reservist was convicted and sentenced for mishandling classified military materials" despite no "evidence he intended to distribute them." Last year, a Naval officer was convicted of mishandling classified information also in the absence of any intent to distribute it.

We're also talking about a woman who thinks Edward Snowden didn't go through "proper channels" before leaking information about mass domestic surveillance to the public and should face legal consequences, though the whistleblowing channels she refers to probably wouldn't have applied in Snowden's situation. Despite deliberately not managing communications appropriately to make sure everything goes through "proper channels" with correct level of security, she wants to be treated differently.

For these reasons, it's extremely disconcerting to see the Department of Justice and some of the left decry attempts by conservative criminal justice reformers to increase requirements where consideration of mens rea should apply to federal law.  Their argument is that it makes it harder to prosecute people, particularly white-collar criminals, which is partly the point of mens rea. Some on the left and within the Justice Department want to be able to prosecute corporate actors for violating one of the thousands of federal regulations that they claim protects safety and the environment, and they want to be able to do so without having to prove that people knew that they were doing anything wrong.

The vast difference between how Clinton has been treated here and how us commoners are treated should be a wake-up call for any civil rights organization who resist the expansion of mens rea. It's already being applied unfairly so that the powerful are protected. That it's so much harder—and so very expensive—to fight back when we don't get the same consideration is an indication that it's the lack of mens rea that's the problem.

Obviously, this suggests the possibility that perhaps the FBI made the right call in Clinton's case, which probably does not sit well with many people. It also ignores the possibility that the Justice Department simply didn't want a fight against a powerful politician with unlimited resources to fight back during an election year and who may have control over their budget come January. Certainly many will believe that there are other considerations explaining why there will likely be no prosecution.

But Clinton supporters will want us to take this decision at face value, so do that as an exercise. Then turn and ask these people if they believe a similar mens rea standard should apply to everybody—even those dastardly Koch brothers—accused of violating federal laws.