What Gary Johnson Should Have Said About Heroin

The Libertarian presidential nominee missed an opportunity to make a moral case against prohibition. 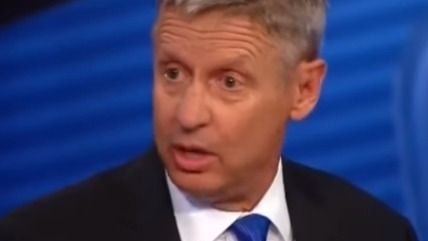 A Libertarian running for president, especially one strongly identified with marijuana legalization, should expect to be questioned about the merits of extending that policy to heroin. But when the question was posed during last night's CNN townhall featuring Gary Johnson and his running mate, William Weld, neither candidate was willing to defend the principle that the government has no business dictating to people which psychoactive substances they may consume. In my latest Forbes column, I argue that Johnson missed an opportunity to make a moral case against drug prohibition:

During a CNN townhall last night, a member of the audience asked Gary Johnson, the Libertarian candidate for president, about heroin legalization. Although the former New Mexico governor correctly pointed out that prohibition makes heroin use more dangerous, he disclaimed any interest in repealing it, saying his legalization agenda is limited to marijuana. He thereby undercut the utilitarian case against drug prohibition and missed an opportunity to make a moral case for individual freedom.

The Libertarian Party's platform states that "we favor the repeal of all laws creating 'crimes' without victims, such as the use of drugs for medicinal or recreational purposes." Johnson therefore was deviating from the party line when he declared that "we are not espousing the legalization of any drugs outside of marijuana." That was the easy way out, since most Americans recognize that marijuana is less hazardous than alcohol and think it should be legal. But what is the point of a Libertarian presidential campaign if it does not encourage voters to think about public policy issues in a more consistent and principled way?