Stay or go, however, the UK's own regulatory burdens won't go away. 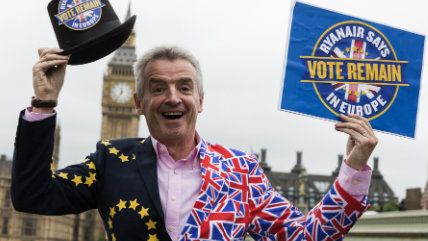 How many people does it take to change a lightbulb in England? Depends on what the European Union (EU) says.

A priest in Suffolk, England used to hire a man to climb a ladder to change his lightbulbs.

That was fine until the European Union Working at Heights Directive banned this activity so that now the priest must spend the British equivalent of nearly $2,000 to take two days to erect a scaffold.

Is it any wonder that people in the U.K. are upset with the regulations imposed from Brussels?

Between 1957 and 1997 the EU put out 10,000 regulations. In the next seven years, they added an additional 12,000 regulations (about 1,700 per year). The vast majority of them (only about 1 in 200) have no analysis of the likely impacts. This is problematic as the costs of EU regulations are estimated to be above 70 percent of the costs of all regulation.

But relative to the pace of regulations put out by the U.S. federal government, the EU could be viewed as highly restrained. In 2015 alone,  the United States put out 3,378 rules (with another 2,234 under consideration).

How do we end up with so many regulations, including the ones that may cause a church to close down?

The standard answer in economics is "concentrated benefits and dispersed costs." What that means is that there are always groups—whether they are industry groups or activists groups—who gain a lot from an individual regulation, meaning they get the concentrated benefits. But the people who bear the costs—consumers, small business owners, and workers—generally pay small costs for each individual rule. As the rules add up, so do the costs. The issue is that while ordinary people bear these costs, the incentive for any individual to object to a single regulation is fairly small.

The United States has its own share of stupid rules like specifying the number of cherries that must be in fruit cocktail or the 11 different allowed ways to pack pineapple in a can. And we don't do a very good job at looking at the impact of our rules either, for big or small. Between 2004 and 2013 only 116 out of the 37,000 regulations had estimates of benefits and costs. How about impacts on small businesses? The EPA recently certified that a gigantic rule expanding their jurisdiction over waters in the United States (WOTUS) did not significantly impact small businesses. Farmers appear to disagree strongly.

It's easy to understand the sentiment behind a "Brexit" when the EU required farmers in the U.K. to buy £5,000 machines to label every egg as to when it was laid and the identity of the chicken. (Who knew they all had names?) But go or stay, the problem of regulation will remain in the U.K., just as it will in the United States. However, if the U.K. decides to leave the EU, there are some reforms they could undertake to begin to get control over the regulatory state.

First, set up the system to ensure legislators know what problem they are addressing. Make sure alternative ways to solve the problem are considered and that the benefits of the chosen solution exceeds the costs. This is known as a regulatory impact analysis. Make this a legal mandate, meaning that if an agency doesn't do it, anybody can go to court to stop the rule.

Second, don't pass legislation that gives agencies the authority to pass rules into infinity and with deference on their interpretations from the courts.

Finally, make agencies accountable to legislators. For really big rules, with a high economic impact, they should have legislative approval.

There are many, many bills before the U.S. Congress right now trying to implement some of these recommendations, but they are stalled. One reason they are stalled goes back to why we get so many of these rules in the first place: concentrated benefits and dispersed people bearing the costs in terms of lost businesses, lower wages and higher prices. If the U.K. does leave the EU, it should take this opportunity for a regulatory reset.

— Richard Williams is director of the regulatory studies program with theMercatus Center at George Mason University.

Richard Williams is director of the regulatory studies program with theMercatus Center at George Mason University.