Food is exempted, but what about catnip and flowers? 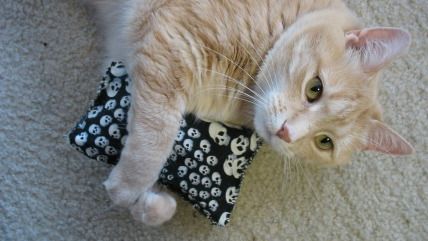 Yesterday a new Britiish law aimed at counteracting the creativity of black-market chemists took effect, making all psychoactive substances presumptively illegal. Weary of banning new drugs only to see yet another batch of legal intoxicants take their place, members of Parliament this year approved the Psychoactive Substances Act, which takes a radically different approach to prohibition, banning substances that do not yet exist. But the catchall law, which criminalizes production and distribution of psychoactive substances unless they are specifically exempted, also seems to ban myriad common products that can be used to get high, even if that is not their primary purpose.

The act covers any substance that "produces a psychoactive effect in a person," meaning that "it affects the person's mental functioning or emotional state" by "stimulating or depressing the person's central nervous system." The law does not apply to "medicinal products" or the already-prohibited drugs in Britain's Schedule 1, which as in the United States includes cannabis, LSD, and MDMA. The law also specifically exempts alcohol, tobacco, nicotine, caffeine, and food or beverages, provided they do not contain a "prohibited ingredient," meaning a psychoactive substance "which is not naturally occurring" and "the use of which in or on food is not authorised by an EU instrument."

Producing, importing, distributing, or possessing with intent to distribute a nonexempt psychoactive substance is punishable by up to seven years in prison. Mere possession is not a crime, except in a "custodial institution," where it can get you up to two years.

Given the exception for food and the lack of penalties for simple possession, some criticism of the new law seems misplaced. "Tea contains caffeine, which is exempt from the ban," notes Ayman Al-Juzi in a Vice article published yesterday, "but it also contains L-Theanine, which is not exempt, and reportedly has psychoactive properties." But L-Theanine, while not specifically mentioned, occurs naturally in tea and is therefore exempt in that context. Likewise theobramine, a lesser-known stimulant in tea and chocolate. Al-Juzi also mentions nutmeg, which is psychoactive in very large doses but presumably qualifies as a food.

Still, the law on its face bans catnip, which is psychoactive but is not "ordinarily consumed as food," along with common products such as paint, gasoline, and solvents that can be huffed for a high. The law says a product qualifies as contraband if "fumes given off by the substance" have a psychoactive effect. Traditional inhalants are not the only products that fit the law's definition of "psychoactive substance." Al-Juzi notes that "flowers contain terpenes, which can cause psychoactive effects." In fact, the law arguably applies to any nonedible substance that stimulates the senses in a way that affects one's mood or mental processes: the perfume of an ex-girlfriend, say, or chlorine reminiscent of a bad childhood experience with swimming lessons.

A Facebook campaign urges critics of the Psychoactive Substances Act to protest it by pestering police with questions about what now counts as contraband. While most of the examples cited (including tea, chocolate, sugar, energy drinks, and fruit) qualify for the food and beverage exemption, it's not a bad idea to highlight the uncertainty that the law creates for both citizens and law enforcement agencies. Can pet shops legally sell catnip toys? Are florists and incense dealers in trouble? Are substances that indirectly stimulate or depress the central nervous system grounds for arrest if possessed in large enough quantities to suggest an intent to distribute?

While it seems unlikely that police will start seizing catnip, paint thinner, or perfume as contraband, the theoretical possibility is troubling, to say the least. Writing in the New Statesman, Leo Barasi says churches that burn incense "should be safe from prosecution because, as the policing minister was forced to clarify, the mind-altering effects of holy smells aren't the intended target of the Psychoactive Substances Act." Whatever the intent, laws are enforced as written, and it is dangerous to give police and prosecutors such wide discretion.

British drug policy reformer Amanda Feilding notes that the Psychoactive Substances Act "tramples on a precious principle of liberty: that your choices are by default legal except when they are banned for a proper reason, after open Parliamentary debate." Under the new law, she says, "your choices are to be illegal by default, except when government-approved."

Feilding worries that the law will drive consumers of heretofore legal highs toward old-fashioned black-market drugs, which in some cases may be more hazardous. It will also drive distributors of newer drugs underground, which surely will not enhance safety. "We know little about these substances," Feilding notes. "No generalizations can be made. Some seem fairly innocuous, certainly no more risky than alcohol, [while] others are really very nasty, and because they are new, and unlabeled, doctors have no way of knowing how best to manage any harmful effects." A wholesale ban on all current and future synthetic psychoactives will make it all the more difficult to learn about their hazards and benefits, leaving consumers ignorant of what they are taking and what it might do to or for them.