Man Died After Being Tased and Cut with a Power Saw by NYPD, City Accused of Hiding Video of Incident 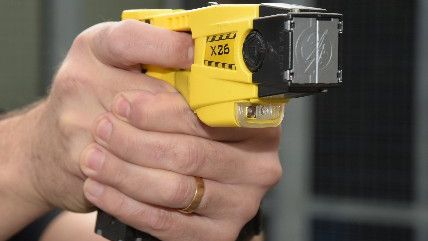 The family of a 29-year-old man who died in July 2015 after being repeatedly tased and cut with a power saw by the NYPD is suing the city for wrongful death, seeking $25 million in damages.

Anthony Paul was living in a "three-quarter house," a place where recovering addicts and people with mental health issues gradually learn how to function again in the world, when he appeared to suffer a breakdown, the New York Daily News reports. When the police arrived, Paul was naked and leaning against a locked door, which officers then started sawing through. According to the suit, Paul received "more than 30 cuts" as a result.

Once the officers gained breached the door, Paul was "aggressive and confrontational," which they believed was due to his use of K2 (synthetic marijuana), though his family's lawyer, Derek Sells, says drug tests turned up negative for the substance. The police tased Paul "multiple times" and he later died in a Bronx hospital.

Sells says there was a camera in the hallway pointed right at the door which police sawed through, but he claims the city only turned over a portion of the video footage taken from that camera, and nothing from the period where the confrontation took place. Sells compared the situation to what happened when the city of Chicago kept the dashcam footage showing Officer Jason Van Dyke shooting 17-year-old Laquan McDonald in cold blood from seeing the light of day for over a year.

The city insists they have turned over all the footage from the hallway camera and that Sells has provided no evidence that footage of the incident which led to Paul's death exists.