Ads About Killing Politics, Tools to Make it Work Better: The McAfee Campaign's Nuts and Bolts

The Libertarian Party presidential campaign of John McAfee uses vivid, unusual videos and new web tools with the goal of bringing something fresh to Party messaging and organization. 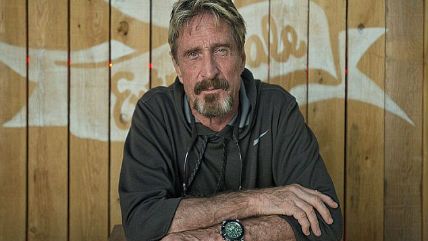 On some level antivirus software pioneer John McAfee seems to think he can energize his campaign for the presidential nomination of the Libertarian Party purely on the abundant sparking octane of his own outsized legend and wild pronouncements.

But that isn't all to his campaign. His vice presidential pick Judd Weiss, and his campaign manager Tiffany Madison (along with a dedicated army of volunteers, Madison stresses), have launched an interestingly strange and attention getting set of campaign ad videos (Weiss) and started building an internet resource for the Libertarian Party that, if it comes to fruition and sticks around, should make the Party a better fit for the modern communication age.

Weiss's fourth and latest video (all of them using the McAfee/Weiss slogan "Let Life Live") is over five minutes long, a length he's quite aware most normal political consultants would call crazy. It's called "Exit Politics."

It uses storytelling, pop culture, tense and maddening music and quick-cut bricolage to create a general aura of disquiet, of detecting something alarming beneath consensus reality and consensus politics, arty-paranoid collages of politicians and pop storytelling, a kind of 4 a.m. in the Nerve-Wracking Room at an EDM club vibe, with an emotional imagistic style that might resonate with a generation who learned their politics from earnest conspiracy theory videos like Zeitgeist:

Washington Examiner noted this anti-political yet pro-Libertarian message in it:

"Every four years Americans come together to bully their neighbors," reads text onscreen in the ad. "Politics is dying. Kill politics so it can be reborn. Be a Libertarian."

The Hill called it "unusual" (though the URL for the article indicates they considered calling it plain "bizarre") and explained:

At one point, the video shows a scene from the TV show "The Simpsons," where a citizen threatens to vote for a third-party candidate and aliens Kang and Kodos laughingly reply, "Go ahead, throw your vote away."

"Unusual" or even bizarre is perhaps just half the reaction Weiss and McAfee want out of the videos. At a McAfee fundraiser last Monday night after the Blaze televised debate in Las Vegas, Weiss premiered the above video for McAfee supporters. He explained the thinking behind them at length.

"We are going after youth," he said. He knows they may turn some people off, and they are even "hoping to create a certain outrage and then pour gasoline on the fire. We want to make something beautiful the media can't resist. We want people on the streets with picket signs [in protest]. That's the goal. I haven't gotten there yet, but give me time, I'm just starting."

In length, in messaging, in lack of lots of verbal information, and especially in libertarian movement terms an appeal via image to emotion and glamour or even a sense of dread—he knows this is "something very different and that's how we will catch attention. I want to create something I would be a fan of and I can't tone it down."

Too much modern libertarian messaging is purely from an engineer's mentality, Weiss thinks. You can't toss complicated economics tomes at most people and expect to hook them. He doesn't think every bit of libertarian messaging needs to do everything, thinking of these videos as a hook in that will lead the interested to the more complicated stuff, applying an assembly line model of sorts of long-term libertarian messaging. "Engineers" in the libertarian movement, "please allow us to sell the engineering you worked so hard on." Mostly, he wants his videos to give people an opportunity to feel something about liberty, something he thinks is lacking in too much traditional movement messaging.

Beyond messaging, the McAfee team also wants to supply useful tech tools to the Party and movement, his campaign manager Tiffany Madison explained in a phone interview. A team of volunteer developers in just a couple of weeks launched the VoteDifferent site, still in early rollout consisting of a national candidate search engine and a survey to "Help our team understand how we can best empower and support our fellow Libertarians now." (The L.P.'s own website candidate list is a bit clunkier and less easy to navigate, as more or less a one-page dump.)

Madison says she anticipates the site becoming a full service site of resource modules helping candidates learn whatever they need to learn, from writing and distributing press releases to how to accept bitcoin donations on their campaign websites, and eventually become a central connecting resource for movement-wide efforts, not just political campaigns.

"We are bringing a startup spirit and lean approach to help people automate and get things done fast," Madison says, helping provide "leveraging tools for ballot access, getting people elected, messaging, if we can get that all" in a highly usable and modern way at one place, she thinks, "that will do wonders" and help provide new ways for people to get involved with the L.P. who might otherwise never do so. Madison hopes and intends that the resource will grow and survive the context of the 2016 nominating race, whether McAfee wins or not.