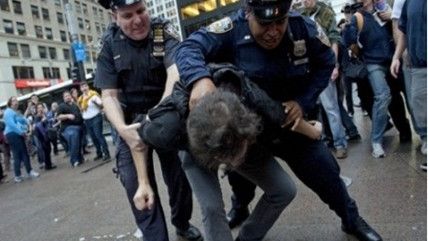 A newly proposed bill in the House of Representatives would deprive police departments of federal funds if they do not provide mandatory training of de-escalation techniques and require the use of such techniques afterward.

Rep. Gwen Moore (D-Wis.) introduced the Preventing Tragedies Between Police and Communities Act last Thursday, which she told The Guardian was inspired by the recent efforts of that outlet and others in creating databases which attempt to count each and every incident where police have deployed deadly force on citizens.

Moore's bill, which has little chance of surviving the Republican-controlled House, would penalize non-compliant PDs of 20 percent of their annual funding from the Department of Justice's Edward Byrne Memorial Justice Assistance Grant, which doles out about $280 million a year to local police departments.

According to The Guardian:

Surveys by the Police Executive Research Foundation (PERF) have found the average police cadet received 58 hours of training on using guns, 49 hours on defensive tactics, and only eight hours on de-escalation. Moore based her proposal on a report by PERF published earlier this year, which set out a series of "guiding principles on use of force".

Among the techniques Moore's bill requires:

De-escalation training has met with some success in places like Seattle, but police unions such as Los Angeles' have forcefully pushed back on the very concept as potentially deadly for officers, who they claim would be put in a "no-win situation" if officers were required to consider not using force in a volatile situation.