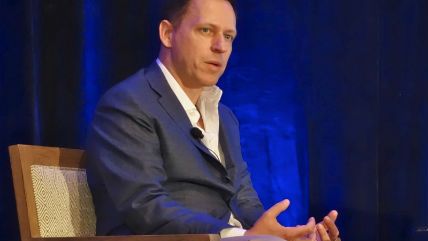 California's secretary of state office recently released an official list of pledged delegates for the state Republican Party. Many were surprised to find on it the name of original PayPal investor and tech billionaire Peter Thiel, whose apparent outing as a Trump supporter has been raising eyebrows and hackles.

Thiel, whose politics mostly seemed to be anti-politics in the past to the extent he's described them at length, fecklessly threw a couple of million at an underperforming Ron Paul-supporting SuperPAC called Endorse Liberty in 2012.

But Thiel also helped launch the libertarian-tinged Seasteading Institute (which seeks to create new lands free of existing governments rules on the high seas, the ultimate anti-politics cause), and created controversy in an essay for the Cato Institute's web site in 2009 in which he seemed to lament the political effects of giving the franchise to women and in general suggested that a healthy free economy and democracy might not be the best bedfellows.

Thiel has not yet commented publicly on supporting Trump, though he did diss him somewhat to Daily Caller back in 2014, saying that Trump was "sort of symptomatic of everything that is wrong with New York City."

He also gave $2 million to a Carly Fiorina SuperPAC this cycle, Wired reports.

In other news from the Trump delegate list, it initially included the name of white supremacist William Johnson, which also created huge controversy.

The Trump campaign is now claiming that he's not really a Trump delegate and that was a database error; they meant to remove his name back in February, likely as a result of the controversy that arose over a set of Iowa robocalls Johnson's American National SuperPAC paid for supporting Trump on explicit white nationalist grounds.

Daily Beast reports Trump did return a direct $250 donation from Johnson after the controversy broke.

Before Trump backpedaled, Mother Jones wrote a long, detailed, and entertaining profile on Johnson and his love of Trump. (Johnson, like Thiel, also had a Ron Paul past. He was a Ron Paul donor, and back in 2008 even hosted a fundraiser for Paul and ran a Los Angeles based Meetup online group in Paul's support, and ran for an L.A. Superior Court judgship. I recall at the time other SoCal Paulites professed to not being familiar with his white nationalist beliefs, which are detailed in the above Mother Jones profile.)