Mark Cuban Asked to Run For President with Libertarian Party; "Flattered" But Family Would Rebel 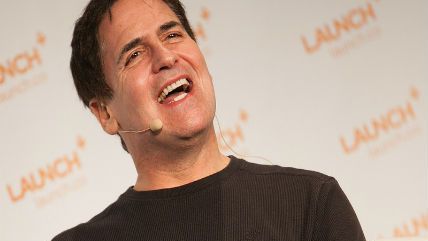 Charles Peralo is an inventor and early adopter in the Bitcoin space who is running for chair of the National Libertarian Party this year.

He had informally explained some things about Bitcoin years ago to billionaire sports team owner, entrepreneur, and Shark Tank star Mark Cuban when connected by a mutual associate, and had a personal email for Cuban.

Peralo emailed Cuban, in the wake of the certainty of the Trumpening, to think about saving America by running for president with the L.P.

Peralo promised he could get Cuban a ton of instant endorsements within the Party.

Cuban responded, in an email Peralo posted on his Facebook, that: "My wife and kids would run away if I did. But I'm flattered."

Well, someone is going to be on the ballot in likely every state with the Libertarian Party, most likely at this point former New Mexico Gov. Gary Johnson. Sensible Republicans with a free-market, small-government bone in their body need to think hard about that, certainly starting now.

I'm not sure if Mark Cuban would be my pick for president. The thing is the guy over the years has said some very libertarian type views and I feel he could…actually have us win on a friendly pro business and pro freedom message.

I'm happy with the current crop of candidates, but I am aware that someone like Mark Cuban could not only get us to the magic 15% number, but would probably win. Also, I think other people in the LP should at this point probably be calling up Tim Draper, David Koch and other business moguls with liberty views to come in and be our Trump. And by "our Trump" I mean be peaceful and filled with dignity.