Republicans Are Coming Around to Donald Trump. Of Course They Are.

The billionaire candidate's presidential campaign reveals both the emptiness and the awfulness of the GOP. 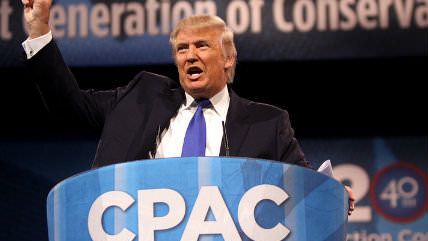 The closer Donald Trump comes to winning the Republican presidential nomination, the more apparent it becomes that much of the GOP will back him when he does. In the process, Trump's campaign is revealing both how little the party truly stands for and the ugliness of what it is willing to tolerate in its name.

Over the last few days, an array of GOP elites have made it clear that even if they do not exactly care for Trump, they will offer him their support in the general election. Former Speaker of the House John Beohner and Judd Gregg, an ex-GOP Senator from New Hampshire, both said they would pull the lever for Trump in a general election. Tennessee Sen. Bob Corker, the top Republican on the Senate Foreign Relations Committee, had previously denounced Trump's proposed ban of Muslim immigrants as running counter to the nation's values. But last week he lavished praise on Trump's foreign policy address, calling it a "very good foreign policy speech" that challenged establishment thinking on the issue.

On Capitol Hill, more Republicans are looking for ways to cooperate and coordinate with the likely nominee, The Wall Street Journal reports. The Trump campaign's outreach to the party, which is predicated on the idea that Trump's outrageous trail persona is an act—essentially that he has been putting on a show for voters—appears to have effectively mitigated some of the skepticism party stalwarts have had about the candidate.

Indiana Gov. Mike Pence gave a waffling endorsement to Ted Cruz last week, but he also spoke up for Trump at the same time. Trump's outreach effort may not generated full-throated support from the GOP, but it has made the candidate tolerable.

Indeed, even some of those who have been most critical of the candidate now admit they will support him in a general election.

Former Texas Governor Rick Perry, who blasted Trump as a "cancer on conservatism" during his brief presidential run last year, said recently that "at the end of the day, I'll vote for Trump." Maybe cancer isn't so bad after all?

And then there is Florida Sen. Marco Rubio, another former rival who spent the final weeks of his presidential campaign vigorously insisting that Trump should not and could not be the party's general election representative. In February, for example, Rubio said Trump was "trying to hijack the conservative movement and the Republican Party, and he cannot be our nominee." Rubio even offered #NeverTrump branded merchandise in his campaign store.

Yet Rubio too made clear last week that he would support Trump, should he win the nomination. Because Trump has the most important, and perhaps the only necessary, qualificaiton: He is running as a Republican. "I've always said I'm going to support the Republican nominee, and that's especially true now that it's apparent that Hillary Clinton will be the Democrat nominee," Rubio said last week. That is not exactly an endorsement; but it signals a willingness to fall in line. It is tacit support.

Which, of course, is what the party apparatus has pleaded with everyone to do. Reince Preibus, the head of the Republican National Committee, has repeatedly urged Republicans to agree that they will support the GOP nominee, period, regardless of who that person is.

It is true, of course, there are Republicans, like Sen. Ben Sasse, who have vowed not to support Trump under any circumstances. It is possible that some number of down-ballot candidates this fall will distance themselves from Trump.

But on the whole, Priebus' admonishments appear to be working. The Republican party is moving to support Trump, its likely nominee. Of course it is.

Despite talk of third-party runs and anti-Trump absolutism, it was predictable, and perhaps inevitable, that most of its members would fall in line.

Perhaps the most charitable way to think about this is that the party, as an institution, lacks a functional mechanism for declaring a candidate unacceptable. The party apparatus has been designed to offer support for the nominee, whoever that person is, but not to set standards for its candidates. In some sense this is true of all political parties by definition: Both Republicans and Democrats coalesce around the goal of winning elections, with all other concerns rendered secondary at best.

But Trump's campaign demonstrates just how far that sort of standards-free backing goes, and how easily it happens. Yes, Trump has been controversial and widely criticized, even within Republican circles: Witness George Will's call for conservatives to help ensure a 50-state loss for Trump if he wins the nomination.

That call suggests the unusual nature of Trump and his candidate, but it also demonstrates the distinction between party and ideology, and why it is important to distinguish between the two. Will is committed to a political ideology, and interested in the party mainly as a vehicle for that ideology. The party is interested exclusively in its own fortunes, and relies on ideological appeals only when it is convenient. Those who identify more as conservatives than as Republicans have tended to be much more forceful in their opposition to Trump.

Trump, then, is exposing the emptiness of a Republican party which stands for nothing but its own continued electoral success. In this view, there is essentially nothing that he could have said or supported that would have caused the party to withdraw its support. Trump's campaign has provided plenty of evidence for this; over and over he has said things that appear to go too far—and then paid no political price for it. It is hard to avoid the conclusion that the only way that Trump could have made himself truly unacceptable in the GOP primary would have been to run as a Democrat.

There is an alternative, however, which is that the GOP does have the ability to weed out objectionable candidates—and that Trump has simply not met the threshold that would render him unacceptable.

There is evidence for this view as well. Yes, he is rougher around the edges than most Republicans, and more vulgar in his style and personal presentation, but he is faithful enough to the core tenets that the party actually represents that he does not represent a serious departure or a threat.

Trump may express his hostility towards immigrants more crudely than other Republicans, but, in a world where most GOP presidential candidates press for substantially increased restrictions on immigration, and Trump's closest rival, Ted Cruz, has been vocal about his willingness to order mass deportation, it is mostly a departure in tone. He may have a nonsense tax plan that he misdescribes and a half-baked health care proposal that he doesn't himself understand, but isn't that true of many, even most, of his Republican rivals? Yes, he's more open in his embrace of old age benefit programs and budget math that doesn't add up, but functionally, is he really so far from how the GOP has behaved, in practice, when it comes to fiscal policy and entitlements?

The reality is likely a mix of these two frameworks, with some in the party supporting him simply because he's the Republican nominee, and some because they see a candidate who ultimately shares enough of their political values.

In any case, the picture that emerges under either understanding is not flattering for the Republican party. So long as the GOP and its leaders are willing to stand by Trump if he becomes the nominee, the clear message it is sending is either that it stands for nothing—or that, like Trump, everything it stands for is awful.

Addendum: Maybe the question to ask here is, well, should the Republican party reject Trump? There's not much recent precedent for either party taking such a drastic action. And there's no question that a wholesale rejecting, in any form, would be a major step. But it does raise the question of just what it would take for Trump to simply lose the support of the party apparatus, its elected officials and professional class. The point is that in backing Trump, even tacitly, Republicans are still giving their blessing to his behavior. They may not be entirely enthusiastic about it, but they are admitting that they do not find anything he has done or said to be truly unacceptable for the person who, for at least six months of an election year, will be far and away the most prominent representative of their party.