Mass Transit Use Is Declining As Millennials Buy More Cars 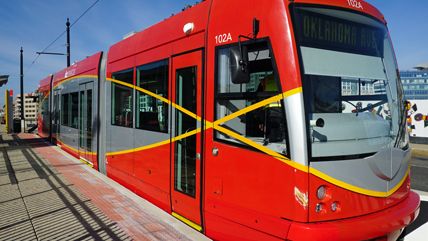 More than a quarter of U.S. government spending on surface transportation goes to mass transit, and yet mass transit accounts for less than 2 percent of total trips taken nationwide. The Competitive Enterprise Institute's Marc Scribner attributes this eye-popping mismatch to a persistent "falsehood peddled by the transit lobby": If you build it, they will come.

A stunning chart put together by the University of South Florida's Steve Polzin illustrates how transit supply has failed to create its own demand.

The blue line represents transit ridership; the red line shows the expansion of the country's mass transit infrastructure going back to 1970. Their divergence is a "report card on productivity that mom and dad would hardly be proud of," Polzin writes. It's also a statistical representation of a sad yet all-too-fami

As Polzin notes, data from the Bureau of Transportation Statistics and the National Transit Data Program show that transit ridership in the U.S. has been declining recently. Yet advocates hold out hope that millennials will deliver on the mass transit renaissance they've been claiming is right around the corner since the 1970s.

It's not going to happen. As Reason Foundation Director of Transportation Policy Bob Poole noted recently, J.D. Power's and Bankrate.com report that car buying is surging among millennials. This data contradict a 2014 paper from the Public Interest Research Group (PIRG) claiming young people were no longer attracted to automobiles and therefore the U.S. should divert even more money to transit.

For more on the failure of mass transit, click below to watch a video story I put together on Washington D.C.'s disastrous new streetcar line: