Two days ago, a jury ruled that police were responsible for the 1989 Hillsborough tragedy. 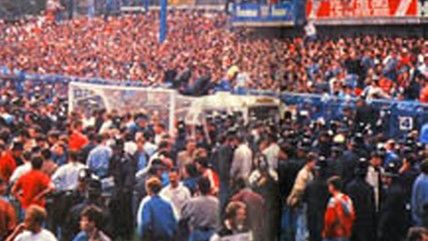 It's been just over 27 years since 96 people died in a massive stampede at a soccer match in Hillsborough, England, and the victims families are finally getting some acknowledgement of the systemic incompetence and subsequent cover-up committed by the two police agencies responsible for the safety of the match's spectators.

Almost immediately after the April 15, 1989 tragedy at which more than 700 were also injured, police had tried to put the blame on drunken, violent, and trespassing Liverpool fans.

But in fact, a since-scuttled tradition of keeping hundreds of fans with standing-room-only tickets in a fenced-in pen behind the goals, combined with the police's fateful decision to let hundreds more fans stream through the stadium's gates rather than go through turnstiles individually, led to a frenzied crush of people and unspeakable carnage.

This past Tuesday, a jury ruled that the fans were not to blame, that the 96 dead were "unlawfully killed," and that the chief officer in charge was had been "in breach of duty."

The BBC reports that the law firm representing the families released a statement announcing its lawsuit against the South Yorkshire and West Midlands police forces for "abuse on an industrial scale," and accused the police of spending a fortune in taxpayer-financed efforts of "defending the indefensible."

The statement also read in part:

The systematic cover-up intended to transfer the blame for what happened from South Yorkshire Police to the innocent, by spreading lies, doctoring evidence, pressuring witnesses and suppressing the truth.

In addition to the lawsuit, The West Midlands police force faces legal action "over claims it altered statements taken from football fans" at the match, according to The Guardian.

The former editor of the tabloid The Sun, Kelvin MacKenzie, apologized for his role in perpetuating the police's version of events, having run a cover story titled "The Truth" that placed the blame for the tragedy on the fans. As reported by The Independent, Mackenzie said:

The headline I published was wrong and I am profoundly sorry for the hurt caused. Clearly, I was wrong to take the police's version of events at face value and it is a mistake I deeply regret.

The branch secretary for the South Yorkshire police's retired officers association published a letter on the association's website telling the officers that despite the verdict holding the force responsible for the tragedy, they should be proud of their work. The letter was later removed.

Update: You can watch a short video here consisting of photos and testimonials from those who survived the Hillsborough disaster.

Below, a BBC documentary on the tragedy and the cover-up: