Michael Shannon does the almost impossible, Mads Mikkelsen the near-unbelievable. 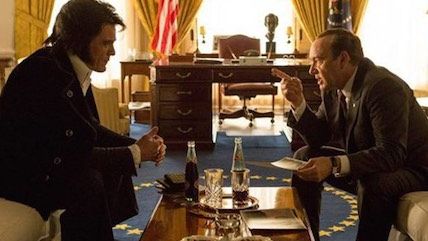 Michael Shannon might seem the least likely of actors to be cast in the role of Elvis Presley. Shannon is slender and drawn, a man on the brink of boney. Presley, in 1971—the year in which Elvis & Nixon is set—was full in both face and figure. But Shannon gazes deep into the enigmatic legend and creates a character walled off by his worldwide fame, but still glumly amused by its effect on everyone he encounters. He deploys wispy smiles as young women tremble and squeal in his presence, but he also conjures a presiding air of loneliness. It's a carefully subdued performance, funny and affecting, and it's reason enough to see the movie.

The story recounts a bizarre real-life meeting, and it begins, fittingly, in Memphis. Elvis is sitting in a room at his Graceland estate, watching four televisions at once. He's disturbed by the pageant of contemporary riots and antiwar demonstrations passing across the screens. Hippies. Drugs. "We're goin' downhill," he mutters. He decides to do something about it. He starts by shooting one of the TVs.

By 1971, Presley's unfortunate movie career (31 films, most of them pure cheese) was behind him; but his musical comeback, launched in 1968 with a legendary TV special and later fueled by a lucrative Las Vegas residency, was still going strong. Now it's December, and we see the King and his longtime associate Jerry Schilling (Alex Pettyfer) flying to Washington, D.C. to deliver a letter that Elvis has hastily scrawled to President Richard Nixon (Kevin Spacey). Elvis wants to be of service to his troubled country; in particular, he wants Nixon to name him a "federal agent at large," whatever that might be, and to give him an official badge.

Presley and Schilling are rebuffed at the White House gate, but the guards send Elvis's letter in to presidential aide Egil Krogh (Colin Hanks). Krogh immediately grasps the value of having Nixon, a hopeless square, siphon off some of Presley's legendary cool. Nixon is having none of this, though. A famously hunched and graceless man, he is among other things intimidated by Presley's good looks. ("I didn't win some sort of genetic lottery.") But finally he agrees to give the celebrated visitor a five-minute audience.

Elvis enters the Oval Office in all his Elvis-ness: the gold-framed shades, the rings, the medallion, the huge gleaming metal belt. The five minutes come and go. Nixon is entranced as Presley rails against commies and war protestors (he badmouths the Beatles) and the illegal drugs that are "messin' with the kids' minds." (The movie makes no mention of Presley's own large appetite for prescription uppers and downers and sideways medications of every sort.) The born-poor president senses a connection with this onetime truck driver. "You and me rose from nothing," he tells Elvis.

Richard Nixon is now all but lost in the mists of caricature, but Spacey brings new wrinkles to his impersonation of the man. When Elvis's attention is drawn to a clump of stone in Nixon's office, the president explains that it's a moon rock, personally presented to him by astronaut Buzz Aldrin. Presley waits a beat, then says, "Buzz sent me one, too"—and Spacey shows us a wound opening up in Nixon's psyche.

But it's Shannon who carries the movie, building up his Elvis from an accumulation of whispery character details. There are some winning little scenes: Presley encountering an Elvis impersonator in an airport, an impromptu visit to a black diner (where Elvis orders a huge donut). Especially memorable is the scene in which Presley shows Schiller his instant-Elvis travel kit—a case containing such necessities as his black hair dye and the hemorrhoid cream he uses to fight under-eye baggage. "I become a thing," he says. "When I walk into a room, everybody remembers their first kiss at one of my movies. But they never see me."

No one knows what Elvis and Nixon actually said to one another that day in the White House—Nixon didn't start recording the goings-on in his office (for future Watergate-scandal use) for another two months. But given what we think we know of these two men, the dialogue here feels right; and the script—by Joey and Hanala Sagal, punched up by actor Cary Elwes—is at least plausible. And director Liza Johnson (who previously directed Shannon in the 2011 Return) treats the two lead characters with generous affection, never sinking to easy condescension. There's a dull subplot involving Schiller's fiancée, which could have been cut. But no matter: nothing could get in the way of Shannon's wry and touching comic performance.

Once in a rare while you'll come across a movie so completely demented that you wonder what sort of person could have dreamed it up. In the case of the Danish Men & Chicken, that would be writer-director Anders Thomas Jensen. I don't know this man, but now I worry about him.

Okay, not really. Jensen is apparently stable and gainfully employed (he's currently co-writing the script for an adaptation of Stephen King's The Dark Tower). But his movie takes you to some very strange new places.

Two oddball brothers, Gabriel (David Dencik) and Elias (Mads Mikkelsen), have just lost their father. He has left behind a videotaped message informing them that he's not really their dad—that their real father is a renegade geneticist by the doomy name of Evelio Thanatos. Some quick research tells Gabriel that Thanatos, now 99 years old, lives in an abandoned sanitarium on the remote island of Ork. Gabriel, a philosophy professor, and Elias, a compulsive masturbator, make their way to Ork and at the decrepit sanitarium find three brothers who share their distinctive familial hare lip. These three attack the two interlopers with heavily stuffed animals, weighty planks and an industrial-size soup pot. But soon a truce is called.

The three brothers, whose home is filled with strolling livestock—chickens, pigs, geese, sheep—are even odder than Gabriel and Elias. Franz (Søren Malling) is a cheese-obsessed hothead, Josef (Nicolas Bro) a waddling tub of a man, and Gregor (Nikolaj Lie Kaas) a bedraggled halfwit. Like Gabriel and Elias, none of these brothers have girlfriends—although they do seem to have an unusually close relationship with their chickens.

As for the mysterious Thanatos, he's upstairs in his bedroom, incommunicado. And when Gabriel and Elias finally break into that chamber, they find that Dad is in, shall we say, no condition to explain anything.

Many weird things transpire (badminton rears its head at one bizarre point), but I'll not go into them. The pressing question for all five brothers becomes: who are their mothers? And the answer, when finally arrived at, will surely ring bells with fans of H.G. Wells.

The movie's tone is alternately sweet and grotesque, and its most peculiar feature— which is saying something—might be its conclusion, which almost qualifies as a happy ending. Almost.