She says Vermont "has the highest per capita number" of New York crime guns bought in other states. 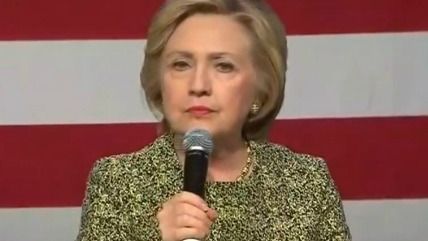 Yesterday Hillary Clinton went public with her previously private complaint about Vermont's supposedly outsized role in New York gun crimes, which she explicitly linked to the supposedly lax gun control views of her opponent for the Democratic presidential nomination. Here is what Clinton said about Bernie Sanders and the state he represents in the Senate during a panel discussion on gun violence in Port Washington, New York:

When challenged on his gun stances, he frequently says, "You know, I represent Vermont. It's a small rural state. We have no gun laws."

Washington Post fact checker Michelle Ye Hee Lee observes that "the number of people in the source state is a problematic denominator, because gun trafficking deals with the behavior of gun dealers and the type and enforcement of state laws." She quotes John Roman, an Urban Institute senior fellow who studies gun control: "It doesn't matter how many people live there. The issue is, how many gun dealers are there that are contributing to violence in New York?" Roman, who has worked with New York officials on gun issues, says, "I literally have never heard of Vermont coming up in this conversation." Lee gives Clinton's claim about Vermont guns "three Pinnochios," a rating category that includes "statements which are technically correct…but are so taken out of context as to be very misleading."

Clinton's broader point about Sanders is just as bogus as her gun numbers. The Vermont senator brags about his low ratings from the NRA, and his gun control positions are very similar to Clinton's, except that he is more skeptical of holding gun manufacturers and dealers liable for the criminal actions of their customers.