Who Will Win the Battle of New York? 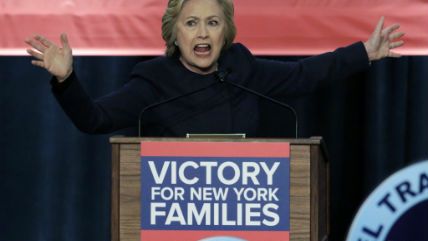 For the first time in living memory, it's presidential primary season and New York and California actually matter. In TOTALLY UNRELATED NEWS, both coastal behemoths just this week up and decided to enact a $15 minimum wage, regardless of whether it makes economic sense. Bernie's bad ideas—they're not just for the dorm room anymore!

Anyhoo, this crazy-pants election now gets its #NewYorkValues on, as Ted Cruz wages political war on the Triborough Troika. After his shellacking in Wisconsin, Donald Trump needs to maintain his huge polling lead in the Empire State on April 19 if he's going to have any chance of reaching 1,237 delegates before the Republican National Convention, but focus not on his margin but on the threshold of 50 percent (a new poll out today has him at 52%). Each of the 27 New York congressional districts awards three delegates; all three will go to anyone winning a majority of the district, otherwise they'll be divvied out 2-1. The same is true of the state's 14 unbound delegates. So if Donald Trump gets exactly 50.1 percent of the vote in each and every district, he sweeps the state's 95 delegates. If he comes in at 49.9 percent? Only 61. That could mean the difference in getting to a first-ballot win, which could in turn mean the difference of winning the nomination. It's going to be a zany couple of weeks, folks.

The same is true for the Democrats. Hillary Clinton really should win New York, being a former U.S. senator from here, but Brooklyn Bernie—who, as Nick Gillespie aptly points out, is just an archetypal New York character in a thousand different ways—has won six out of seven primaries, and excites hipsters even more than that other Elizabeth Warren type, Zephyr Teachout, who shocked prognosticators by winning 34 percent of the vote two years ago in a shoestring primary challenge against incumbent Gov. Andrew Cuomo. "They're very worried about a Zephyr Teachout situation," an anonymous Clinton ally recently told Politico. "The left is very mobilized. In New York, it's not just about winning. They have to win 65 to 35." Forget that spread—she has to win, period, to avoid getting into the awkward situation of relying on undemocratic superdelegates to break a virtual Democratic tie.

Anyway, I'll be talking about this stuff on tonight's Kennedy (8 p.m. Fox Business Network, with a repeat at midnight) where I will be joined by Townhall editor Katie Pavlich and professional misanthrope Gavin McInnes. Also appearing on the program are Ron Paul and Jimmy Failla and Buzz Aldrin, so it should be a hoot.