Cuban Internet Censorship is a Good Thing, According to The Nation

Venerable progressive mag argues in favor of a repressive regime controlling access to information, because it beats "corporate control." 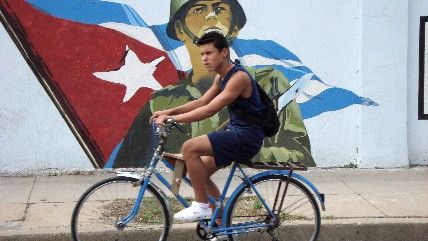 What's worse than living under a repressive regime that tightly controls your ability to engage the rest of the world, censors anything remotely critical of the government, and only doles out broadband internet access to privileged individuals?

Why, Google, of course.

That's the basic thesis of a recent article in The Nation, written by Sujatha Fernandes, a professor of sociology at Queens College and the City University of New York (CUNY).

Over more than 3,000 words, Fernandes

concedes that "It is generally agreed that Cuba would benefit from better telecommunications infrastructure" but cannot simply say that a major reason Cuba has an abominable internet penetration rate is because its communist government fears what would happen to its one-party grip on power if its citizens had access to the World Wide Web.

Though she parrots the Cuban government's claim that "27 percent of Cubans currently have Internet access," in actuality only about 5 percent can access the global web (rather than a closed state-run intranet), and those lucky users are either in the government or hand-selected "friends" of the regime.

The piece is riddled with self-contradictory observations, such as blaming the US embargo for "hampering Cuba's access to Internet technologies" but a few paragraphs later noting that "in 1996 the embargo was amended to allow US companies to provide telecommunications services to Cuba."

Though the embargo is undoubtedly a failure whose days are hopefully numbered, reading this piece, one could surmise that Fernandes thinks keeping Cuba pure from the supposedly destructive corporate influences that will be brought upon the island by engagement and trade with the US is preferable to allowing the Cuban people the full, unfettered internet access she is able to enjoy.

Fernandes acknowledges that the Cuban government's introduction of a few dozen public Wi-Fi hubs, which are often so crowded they lack both the physical space or bandwidth to satisfy demand, "reflects the strong desire for connectivity." But she theorizes that the current system of top-down censorship and strictly doled-out access is a uniquely positive aspect of Cuban culture.

She backs up this idea with a quote from a Havana-based professor and journalist, Milena Recio, who advocates "preserving the best aspects of the current system, which keeps the infrastructure in Cuban hands, avoids the market as the principal distributor of connectivity, and has very little commercial advertising."

According to Fernandes, one of the "best aspects of the current system" is EcuRed, basically Wikipedia Cuban-style, whose stated goal is to "create and disseminate knowledge from a decolonizing, objective, and truthful point of view."

How does the site achieve this decolonized database of knowledge?

EcuRed is run by the state, and controlled by moderators who are government employees, but participation is open to all Cubans who are willing to abide by its rules of neutrality in reference to controversial political themes. The moderators enforce these rules, and can delete or edit content and block registered users.

"Neutrality in reference to controversial political themes," sounds an awful lot like total deference to the government's point of view, and nothing at all like an "objective…truthful point of view."

Fernandes concedes that the government-run intranet "has been criticized by groups such as Freedom House for being a filter for the state to restrict what Cubans can and cannot see." This includes the shuttering of a blog run by a "self-described LGBTQ and anti-capitalist collective" for "denigrating the revolution" when they criticized the Castro regime for failing to make amends for putting gay men (or in revolutionary parlance, "antisocial elements") in forced-labor camps in the early days of communist Cuba.

But, Fernandes argues, Internet censorship is a good thing because "it has actually been used by Cubans to develop local means of creating and sharing knowledge."

One of these means of sharing knowledge is the dissemination of "Weekly Packets," or pacquetes semenal, which are hard drives filled with TV shows, movies, newspapers and other data from around the world (but mostly the US) that are cultivated by hackers, shuttled around the island by "data mules," and ultimately consumed by a public hungry for entertainment and information denied to them by their government.

Recio makes the inexplicable case that "Even if Cuba were to develop the infrastructure to make broadband Internet easily available to its residents…the Weekly Packet will not go away," and adds that even though the Packet is comprised completely of pirated copyrighted material, "she hopes that it might transition into something more akin to Creative Commons, where freely available content not limited by copyright restrictions can be part of an open and plural public domain."

Making yet another argument in favor of the current status quo of state-imposed censorship, Fernandes writes:

Most Western press coverage about the Internet in Cuba presents the government as holding back its expansion because of political concerns. It is said that the Cuban leadership fears that exposure to democratic ideas and the means of self-organization could be destabilizing for the revolution. Dissident groups and bloggers have argued that the Cuban government deliberately controls access to digital technologies as a means of social control. These blanket statements tend to conflate two sets of concerns: One is the fear of what the government calls "ideological risks," and the other is the security and privacy issues that have been endemic to the worldwide Internet.

Decrying "blanket statements" which she does not claim to be untrue, Fernandes argues that because companies like Google have complied with the US government in handing over their customers' personal information, it's better to just cut out the middle-man and have the government in total control of the internet: because "privacy."

While the state censors and restricts Internet usage in order to quell political opposition, the government's security concerns about handing over its telecommunications infrastructure to a company like Google are real. Particularly in light of the evidence revealed by Edward Snowden about how the US National Security Agency is using the Internet for spying and to engage in surveillance of users—and paying telecom companies for access to their communication networks—ceding control over Cuba's digital sphere to private US companies could put Cuba at the same risk of insecurity that has occurred in other countries.

It is completely fair to point out that Snowden's revelations about how the NSA planned to infiltrate Google and Samsung apps as a means of spying on people raised legitmate and unsettling privacy concerns for both governments and citizens beyond the US' borders.

However, it simply beggars belief to state that US internet users are under "ubiquitous surveillance" which "devalu(es) the Internet as a public resource," but Cubans who have to smuggle infomation to each other illegally (even if such smuggling is tolerated for the moment by authorities, provided the citizens don't share pornography or "anti-government" material) enjoy "rich cultures of connectivity."

Fernandes suggests that the current Cuban internet culture, which includes people desperately trying to chat over Skype or Facebook with overseas relatives on an insecure and overloaded public Wi-Fi signal, could "provide a strong base for constructing a self-sustaining, open, and accessible digital commons with robust privacy protections."

Further, she waves off the suggestion that the Web is a "paradigm of democratic knowledge and freedom" but is instead "a sphere riven by inequality, corporate control, surveillance, and privacy concerns."

Just two days after President Obama spoke at Havana's el Gran Teatro, a small group of pro-democracy demonstrators took to one of Havana's public wi-fi parks a few blocks away and reportedly shouted "pro-Obama slogans" and things like "Down with Fidel," before they were brutally arrested by authorities.

According to witnesses, a small group of demonstrators had entered a park on San Rafael Street, the most popular of Havana's newly opened Wi-Fi hotspots, where hundreds of people were busily connecting to the Internet or placing international calls over VOIP services. It is unclear how many participated in the demonstration or were arrested; attracted by a loud, angry crowd that had formed on one of the city's principal avenues and was filming the arrests, I arrived on the scene too late to see the original incident but witnessed part of the aggressive police response.

As hundreds of Cubans flooded into the park, perhaps more than 60 raised their cellphones and recorded a rough, even vengeful series of arrests. One protester I witnessed appeared to be running away from the police response as muscular men in guayabera shirts chased him down, pinned him to the ground and then punched him repeatedly in front of hundreds of their fellow citizens as well as foreign tourists and this reporter.

These arrests were recorded by Cuban citizens, but the video won't be disseminated on the Cuban intranet, as it certainly would be deemed "anti-governmental" material by the state.

For the forseeable future, what Fernandes refers to as the "best aspects of the current system," including a strictly-censored online encyclopedia, will remain preserved, as will the inability of Cubans to freely observe and discuss images depicting agents of their government brutalizing their fellow citizens and squashing their modest attempts at peaceful protest.

But at least the Cuban Internet is free of "corporate control."