The 2012 nominee's remarks were scathing, but omitted his own history with Trump. 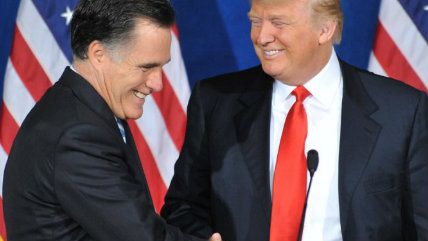 In a blistering speech this morning, Mitt Romney, the Republican party's 2012 presidential nominee, attacked Donald Trump—currently the frontrunner to win the nomination in 2016—as a "fraud," a "phony," and a poor businessman who lacks both the qualifications and character to be the GOP's presidential nominee. It was an unusual and perhaps unprecedented blast from one presidential nominee to his likely successor. In choosing to go after Trump now, however, Romney inadvertently demonstrated why the GOP is losing itself to Trump.

Romney's attack on Trump was direct and unequivocal. "If we Republicans choose Donald Trump as our nominee," he said," the prospects for a safe and prosperous future are greatly diminished." He ripped Trump for his insufficient economic plans, and for the calamities they might produce: "Even as Donald Trump has offered very few specific economic plans, what little he has said is enough to know that he would be very bad for American workers and for American families." He called Trump a bad businessman who "inherited his business" rather than creating it, and whose bankruptcies have "crushed small businesses." He called out Trump's position on trade and foreign policy, warning that Trump would enter the U.S. into a devastating trade war. He charged that Trump lacks the character to be president, citing Trump's mocking of a disabled reporter and his crude attacks on women. He called Trump a liar, saying that "dishonest is Trump's hallmark," and enjoined Republican voters to "think of Donald Trump's personal qualities, the bullying, the greed, the showing off, the misogyny, the absurd third grade theatrics."

In nearly every respect, Romney's attacks on Trump were right on target. Over the course of this campaign, Trump has proven himself to be exactly the boorish, clueless, dishonest candidate that Romney said he is. It was a strong stand against Trump's takeover of the Republican party.

The problem is that it comes far too late. Trump's awfulness and lack of qualifications have always been apparent to one degree or another, and yet the Romney and the GOP sought the support of Trump and played to the people who are now his base anyway.

Just four years ago, during his presidential campaign, Romney stood on stage next to Donald Trump, who had toyed with running for president and placed as high as second in some early polls, and made a minor show of Trump's endorsement.

At the endorsement event, Romney didn't just thank Trump, he praised him for his business acumen and for his grasp of America's place in the global economy.

"Donald Trump has shown an extraordinary ability to understand how our economy works, to create jobs for the American people," Romney said. "He's done it here in Nevada. He's done it across the country. He understands that our economy is facing threats from abroad. He's one of the few people who stood up and said China has been cheating. They've taken jobs from Americans. They haven't played fair. We have to have a president who will stand up to cheaters."

Romney didn't just passively accept Trump's influence. And he certainly didn't warn, as he did today, that Trump was a dangerous fool who would destabilize and perhaps destroy the Republican party. Instead, Romney touted Trump for his business acumen and insight, saying that Trump understood America's economy and its role in international affairs. In other words, he praised Trump using much the same language that Trump uses to praise himself today, and used Trump in an attempt to further his own political ambitions.

Romney, like many Republican elites, has now changed his tune, and he deserves credit for speaking unequivocally about Trump's many serious flaws. But Romney and others in the party played Trump's game, and talked Trump's language, for long enough that they helped legitimize it, and allowed it, even encouraged it, to fester and grow.

Yes, Romney is right that Trump is a liar and a boor, a fraud and a phony. But he's a fraud and a phony that Romney and the rest of the GOP were happy to build up and perpetuate for as long as it suited their own purposes. For far too long, the Republican party was a willing partner in Donald Trump's scam.