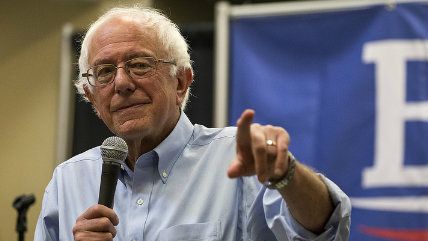 Sanders' plan to replace the nation's health care financing mechanisms with a fully government-run single-payer system have drawn particular scrutiny, with Emory University health economist Kenneth Thorpe finding that, in order to pay for the plan, Sanders would need to impose a 14.3 percent payroll tax and his income-based "premium" (which is really a tax) at 5.7 percent. That's more than double what the Sanders campaign has proposed. It is hardly surprising to find that Sanders has underestimated the tax hikes necessary to pay for his plan. The senator's home state of Vermont killed a long-gestating plan to pursue state-based single payer after confronting the high tax hikes that would be necessary.

Thorpe's estimate also undermines Sanders' claim that under his plan, even with all the new taxes, most families would save money after accounting for the elimination of private health premiums. Thorpe, in contrast, estimates that 71 percent of working homes would actually see an increase in health care spending. Thorpe makes not secret of his generally low opinion of Sanders' plan. He told The Huffington Post that it is "completely implausible."

The basic problem with the Sanders health care plan is that he assumes that U.S. health care spending as a percentage of the economy, which at about 17 percent is by far the highest in the developed world, can be easily cut down to a size more comparable to many other countries, creating massive savings. But his plan provides no clear way to do that, except for the imposition of single-payer itself, and in fact would seem to be even more generous in its coverage than America's current single-payer program, Medicare. He nods toward bringing down the cost of prescription drugs, but doesn't note that pharmaceuticals only account for about 10 percent of health spending; even if drug spending was eliminated entirely, the U.S. would still be spending more than the rest of the world.

Thorpe is not the only liberal economist to question Sanders' attachment to economic reality. Former Obama administration economic adviser Austan Goolsbee recently said that  "the numbers don't remotely add up."

And in an open letter to Bernie Sanders this week, four former Democratic economic advisers, three of whom worked for President Obama, produced a harsh assessment of a paper authored by University of Amherst economist Gerard Friedman, and touted by the Sanders campaign, finding that Sanders' economic plans would produce GDP growth in excess of 5 percent annually—even more than the already empty 4 percent growth target proposed by Republican presidential candidate Jeb Bush.

"We are concerned to see the Sanders campaign citing extreme claims by Gerald Friedman about the effect of Senator Sanders's economic plan—claims that cannot be supported by the economic evidence," the letter says, adding later that, "As much as we wish it were so, no credible economic research supports economic impacts of these magnitudes." In other words, they're total hokum.

Paul Krugman has piled on too. In a column citing the economists' letter, he argues that "these claims for the Sanders program aren't just implausible, they're embarrassing."

There are various political agendas in play here, of course. This is one of many skirmishes in the left's ongoing battle between its establishment and activist wings. These economists are all liberals of some stripe, but they are also establishment operators, and they are weighing in against an insurgent candidate.

But there is also a clear worry that Sanders could end up discrediting the liberal economic agenda. Krugman, for example, writes that he is broadly supportive of higher taxes and an expanded social safety net, he believes that these rosy claims undermine the case for progressive programs:

Good ideas don't have to be sold with fairy dust.

Mr. Sanders is calling for a large expansion of the U.S. social safety net, which is something I would like to see, too. But the problem with such a move is that it would probably create many losers as well as winners — a substantial number of Americans, mainly in the upper middle class, who would end up paying more in additional taxes than they would gain in enhanced benefits.

By endorsing outlandish economic claims, the Sanders campaign is basically signaling that it doesn't believe its program can be sold on the merits, that it has to invoke a growth miracle to minimize the downsides of its vision. It is, in effect, confirming its critics' worst suspicions.

Well, yes. And the reactions from Krugman and his peers confirm that critics are right to be suspicious that the end-state for progressive economic policy—the Bernie Sanders-endorsed democratic socialist extreme favored by activists on the ground—is a radical expansion of government built on economic claims that simply aren't believable.