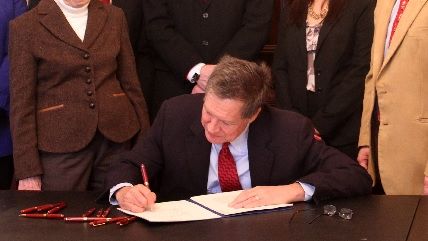 Now is John Kasich's moment. The Ohio governor finished second in the New Hampshire Republican presidential primary, a finish he had banked on getting to propel him into upcoming primaries in South Carolina, Nevada, and beyond.

Kasich, and his opponents, know he's fairly well poised to pivot to the center in a general election, and have come to calling him an "Obama Republican" because of his support for the Obamacare Medicaid expansion in Ohio and for Common Core's federal education standards. Kasich insisted he supports local control of schools and that Ronald Reagan supported expanding Medicaid too. He boasts of cutting taxes by billions in Ohio and of balancing more budgets than anyone else.

Several debates ago, Kasich got a question about improving police-community relations, giving him a chance to talk about the kinds of police reforms he's produced in Ohio, like mandating body cameras and imposing restrictions on use of force policies.

When Kasich tried to tackle the collective bargaining privileges public unions have, he didn't exempt police unions, unlike Gov. Scott Walker in his efforts in Wisconsin. Kasich ultimately failed, but understanding that all public unions produce rules that protect bad actors, not just the ones you're politically at odds with. Activists associated with Black Lives Matter included police union contract reforms as one of ten policies to reduce police violence, and launched a website to collect and analyze police union contracts around the country.

Democrats won't talk about the role of police unions in creating the conditions for police violence, because while police unions may not be active supporters, other public unions are. And they work the same way—teachers unions, for example, create the conditions for substandard learning, and often work actively to prevent reform. Some Democrats talk about the link between education and crime, but not about the public unions' role in those links. Bernie Sanders claimed police departments as an example of socialist institutions.

Kasich signed sentencing reforms into law in 2011, just months into his first term as governor. "This kind of reform legislation sat idle for 25 years, maybe. Nobody wanted to touch it," Kasich said. "If you're going to put your own future ahead of other people's lives and their ability to reclaim their lives then you're making a big mistake." Ted Cruz, a first term senator, supported legislation for sentencing reforms but after gaining momentum in the presidential race, has walked back that support, worrying disingenuously that it would put "dangerous felons" on the street.

Kasich's support for criminal justice and police reforms haven't been used to paint him as an "Obama Republican" yet. The National Review's David French pointed out that Kasich is a (relative) darling of the left despite being something of a "theocrat" because the governor uses it to support more government, like expanding Medicaid. He once told a state legislator when he gets to heaven what he did to help the poor would be more important than what he did to keep government small. Support for things like criminal justice and police reforms are tantalizingly close to the realization that keeping government small and helping the poor is largely the same thing. And there are other such flashes too.