By trying to straddle the federalism divide on abortion, his stance seems confusing and unconvincing to all sides. 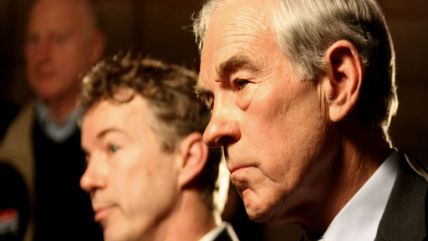 Sen. Rand Paul (R-Ky.) is a super chill guy on political stages such as tonight's debate, even when maybe he should be a bit more forceful in either his defense or attack. He was asked a question tonight by Chris Wallace in which his current abortion position was conflated with his father Ron Paul's.

"Your answer is to turn abortion back to the states the way it was before Roe v. Wade," Wallace told him. "Does that mean that if a liberal state, let's say, wants to make abortion legal, that you're okay with that and what do you say to conservative voters who believe deeply that abortion is murder?"

I expected him to begin his answer with a sharp, "Why Chris that's just not true! Why, just last week I introduced again into the Senate the "Life at Conception Act" which would give full federal protection to unborn life."

But he didn't do that at all. The introduction of that bill, and not for the first time, I assume matches his actual beliefs about what is politically appropriate to do about abortion. The bonus, and what I presumed was the reason it was announced so close to Iowa caucus, is that it also has  the political convenience of appealing to a mass GOP base, especially of the evangelical variety we are told is so important to Iowa.

So I assumed he would take this opening to loudly hype his proposed federal law that, by any interpretation I can give it, would ban abortion federally. (Though in a world with Roe v. Wade still in effect, it would be an instant lawsuit magnet if anything like it ever did become law.)

Instead here is how Paul answered. He didn't evade discussing the law, but he certainly blunted both its political efficacy and any clarity about his actual positions. Excerpts from Rand's somewhat rambling reply:

I've supported a variety of solutions, both state as well as federal. In fact, just last week, I introduced the Life at Conception act, which would say that the 14th amendment would defend an individual even in the womb.

Great! You've made your point for the GOP base that wants an anti-abortion guy. But wait, that's not all:

But if we don't know right and wrong, I think we have lost our way. I think we become unmoored and I think without the religious foundation that guides us all, I think we have a great risk of going horribly in the wrong direction.

That's a great idea for him to get out there, one supposes. The libertarians, and even a certain strain of religious folk, like that idea that government can't be the key to enforcing religious virtue.

Wallace was understandably confused by the "state as well as federal" line and then probably driven off the right track by all that talk about virtue not coming from government in the context of an abortion question.

Wallace hits him again: "Do you favor the idea that abortion should be a states' rights issue and if a liberal state wants to make it legal, that that's their choice? Yes or no?"

And then, on this issue in which equivocation has some severe political hazards, Paul flat out replies with a technically in some ways correct but pretty misleading answer:

I think it would be better the more—the less abortions we have, so the more states that we have that made abortion illegal, the better, as far as trying to save and preserve lives.

It's hard to imagine a more wishy-washy evasive sounding answer than starting the answer to a "yes or no" question with "both."

What might he have been thinking, likely blunting any possible political benefit to a law he's twice introduced and seems proud enough of? He seems to want libertarians, constitutionalists, and federalists to understand both that he doesn't think religious virtue can in general be enforced by the federal government, and that he believes in state solutions as much as possible even when virtue and the law might meet.

That's an interesting insight into his general philosophy, but it is a bit blunted in the specific case of abortion by the fact that he does advocate a federal law that would in essence outlaw it.

So he ended up with a message that came across incoherent on the whole, and never seemed to to actually effectively and finally answer the question in a way that the very voter for whom the Life at Conception Act would be appealing would actually understand what he was saying.

Who knows what if any importance this exchange in the debate will have, but he seemed to take an opportunity to defend and explain one of his own legislative goals and get whatever political goodwill that might engender from the relevant community, and at best complicated it and at worst ruined it.

A somewhat frustrating example of a guy who doesn't often seem like he's equivocating or trying to be all things to all people seeming very literally to be doing that, in a confusing way that might unnerve both pro- and anti-abortion folk.