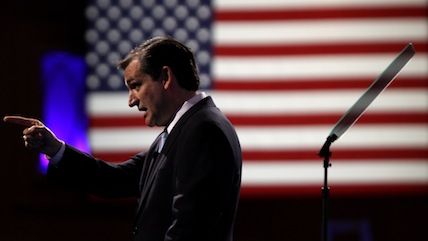 Ted Cruz birtherism doesn't have quite the same bite as Barack Obama birtherism. That's partly because it doesn't hinge on a claim that Cruz is covering something up. Virtually everyone agrees that the Texas senator was born in Canada; the debate involves whether that disqualifies him for the presidency, not whether he's trying to keep it a secret.

But there's another big difference. Those Obama theories are tightly linked with a fear of foreigners, and Canada just isn't on the list of countries that freak a lot of Americans out. Yes, some conspiracy theories about Canada have cropped up over the years; Jeet Heer listed a few in a New Republic piece last week. But the stories he gathered were ultimately about Catholics, Communists, the United Nations, or Islam, with Canada itself playing a supporting role.

No: If it's a tale of truly Canadian subversion that you want—a story that'll prime you to imagine Ted Cruz as a Calgarian Candidate aiming to eradicate American independence—then you need to turn to a film from 1985. In the mockumentary embedded below, you'll learn that the land of the maple leaf has been sending its entertainers southward to infiltrate the United States. With a cast that includes William Shatner, John Candy, Margot Kidder, and Leslie Nielsen, plus Eugene Levy as the Whittaker Chambers figure trying to expose the cabal, here is The Canadian Conspiracy: