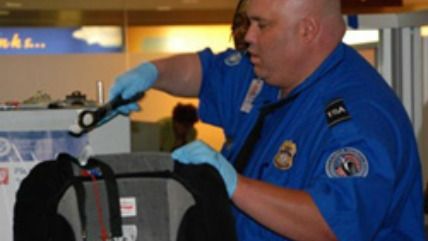 An "investigative summary" posted this month by the Justice Department's inspector general criticizes the Drug Enforcement Administration (DEA) for hiring a federal airport security screener to help find seizable cash in passengers' luggage. Under the arrangement, the DEA designated the screener a "confidential source" and promised him a cut of any money he found while rummaging through people's bags.

Was that wrong? Yes, according to the DOJ's Office of the Inspector General (OIG). The OIG concluded that paying employees of the Transportation Security Administration (TSA) to report evidence of criminal activity was inappropriate, since they are supposed to do that anyway. The OIG noted that DEA policy "precludes registering as a CS [confidential source] 'employees of U.S. law enforcement agencies who are working solely in their official capacity with DEA.'" It also worried that "asking the TSA Security Screener to notify the DEA of passengers carrying large sums of money in exchange for a reward based on money seized by the DEA violated the DEA's interdiction manual" and "could have violated individuals' protection against unreasonable searches and seizures if it led to a subsequent DEA enforcement action."

As Institute for Justice attorney Robert Everett Johnson observes, that last concern applies to civil forfeiture generally, since the DEA and other law enforcement agencies get to keep a share of the property they seize. That encourages cops to target people based on the stuff they have rather than the threat they pose.

"This really is what we see every day around the country," Johnson told The Huffington Post. "When law enforcement takes property using civil forfeiture, law enforcement is able to keep that property and use it to fund their budgets and in many cases even to pay the salaries of people who are overseeing the forfeitures. That creates an obvious financial incentive to take property from people who haven't done anything or haven't been proven to have done anything wrong. It creates an incentive for all kinds of abuse."

People traveling with large amounts of cash—people like Charles Clarke and Luis Felipe Ospina Garrido—are easy targets because the money itself is deemed suspicious enough to justify the initial seizure. After that they must hire a lawyer to challenge the forfeiture, a process that may take months or years and ultimately cost more than they are trying to recover. It can be tempting even for completely innocent owners whose money is seized by the government to give up or agree to a settlement that lets them get back at least some of what they lost.

It is bad enough when confiscated cash helps fund the agency that took it. It would be even more outrageous if the money directly lined the pockets of the government employee whose information led to the seizure. Fortunately, TSA agents seem to be about as good at finding cash as they are at finding guns and bombs. According to the OIG, the TSA screener hired by the DEA "did not provide DEA any actionable information while a CS," "was not paid any money by the DEA," and "was deactivated for inability to provide any useful information."

[Thanks to CharlesWT for the tip.]