SOTU and Guns: The Issue That Didn't Go Off

One off-handed mention, and gun policy gets the (lack of) attention it deserves. 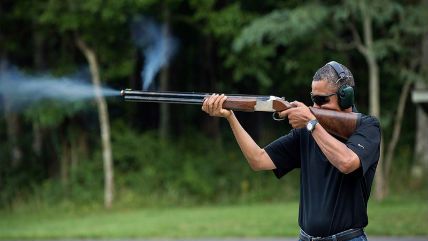 President Obama and his Democratic Party seem to want to make gun policy reform tightening a Thing, but President Obama's State of the Union speech tonight shows that he likely understands it is to his Party as abortion is to the GOP: something to keep letting your base know you are on their side on strongly, in opposition to the nearly evil folk on the other side, but not an issue to really do much in the way of toughening laws.

Merely a week after a big televised White House address followed up by a multi-hour CNN-hosted Town Hall on the issue, Obama gives the matter of guns a literal aside: "I'll keep pushing for progress on the work that still needs doing. Fixing a broken immigration system. Protecting our kids from gun violence. Equal pay for equal work, paid leave, raising the minimum wage…."

It is fitting in his summation of his presidency and the nation's future that he had little more to say on that topic. His actual proposals for gun-related executive actions this year, will likely succeed in bedevilling a number of citizens in that netherworld between "sells guns sometime" and "in the business of selling guns," give people who think they might need mental health care but also like the right of armed self-defense a good reason to never seek mental health care, and of course will stop all those potential gun killers who create a corporate entity in order to buy their guns.

But even Obama knows that these policies will do almost nothing to (further) halt gun violence in the U.S., which has already fallen about 50 percent in the past 23 years.

Remaining gun murders, as terrible as they are, are very likely beyond the reach of anything imaginable or constitutional the federal government can do. Thus, it's fitting that Obama and his main bully pulpit, after one last wan wave of the anti-gun flag, seems prepared to go out giving the issue the very definition of lip service. And despite 2015's series of horrible public shootings, that's about how the American people want it.