Who Will Cry for Lindsey Graham? Not Matt Welch Tonight, on MSNBC's All in with Chris Hayes

Tune in after 8:30 p.m. ET to hear your resident magazine editor talk about the GOP race 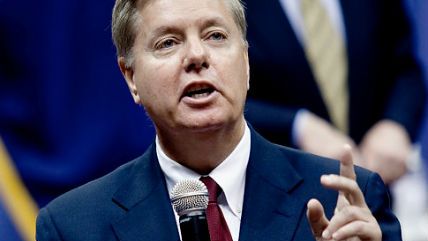 After failing to rise above 2 percent in a single goddamned national poll, South Carolina Senator and Sunday-talkshow heartthrob Lindsey Graham finally announced today that he was taking his one-man fight against ISIS to a different theater than the zany GOP presidential race. Sen. John McCain (R-Ariz.) and the journalists who had to sit through the undercard debates will miss Graham's candidacy; hard to imagine any Republican voters will notice much.

For those of you keeping score at home, that leaves the uber-interventionist pickins looking a little slim. Here are the averages of the four last national polls (i.e., the ones conducted in their entirety after Donald Trump called for a "total and complete shutdown of Muslims entering the United States." I've got the super-duper hawks in bold (feel free to disagree in the comments):

We can quibble over the scoring here (and I'll be honest, I have no idea where to put George Pataki, or Ben Carson depending on the day), but that looks to me like two-thirds support for candidates who at some point have used "neo-conservative" as an insult. No wonder Ted Cruz is getting barrel-fulls these days from interventionists—if he's leading Marco Rubio nationally (as he has all month) and cleaning the Floridian's clock in the early states, there might not be any Weekly Standard-friendly candidate with any shot left in the 2016 race. At least on the Republican side.

Anyway, I'm talking about that tonight on MSNBC's All in with Chris Hayes at 8:30ish p.m., with guest host Alex Wagner and fellow co-panelist Michelle Goldberg. Tune in!