The Will and the Way Problem With Defeating ISIS

Why boots-on-ground, Western or Muslim, are not a good strategy 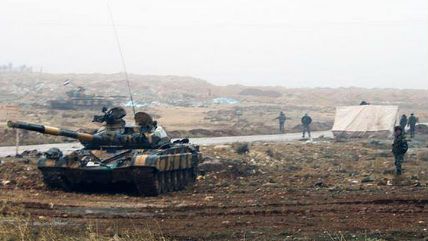 If saber rattling alone could defeat ISIS, then the current crop of GOP presidential contenders (minus Rand Paul)

alone would be enough to do the job. But all this saber rattling can't hide the fact that their calls to put "boots on the ground" won't solve the ISIS problem. That strategy is not likely to endure much past the first videotaped beheading or burning of a captured American soldier, I note in my column at The Week.

But how about the 30-plus-nation military coalition of Muslim countries that Saudi Arabia announced with much fanfare last week? Can a Muslim fighting force defeat ISIS without ugly side effects? It could, if it could get past the irony that the country most responsible for creating the jihadi monster now wants to lead the fight against it.  But there are many other reasons as well to be skeptical that this force is much more than PR.

Go here to find out what they are. But here's the fundamental ISIS conundrum:

"The West — especially after Paris and San Bernardino — has the will, but has no way. The Middle East has the way, but not the will."