Is America's Military Interventionism an Extension of Its Gun Culture? 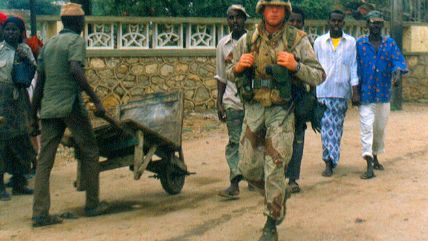 My friend and George Mason University economist Tyler Cowen—whom David Brooks considers "one of the most influential bloggers on the right"—had a fascinating post last week explaining to his fellow libertarians (like me) that their disdain for America's muscular foreign policy abroad is at odds with their support for strong gun rights at home.

edge, but spills "over there." Therefore, if libertarians want to restrain America's adventurism abroad, they will have to stop looking at guns from a narrow rights-based perspective, as is their wont, and start looking at them from the standpoint of the undesirable foreign policy consequences they produce—and so accept some gun regulation.

As a naturalized American from India, I have always been both amused and bemused by the American romance with guns. I have also observed firsthand the destabilizing effect of America's post-9/11 "martial interventions" near my native country. Thus, if there were a serious chance that restrictions on gun rights would help reduce Uncle Sam's war mongering, I would consider it. But color me dubious.

Cowen's argument is intriguing and original—not to mention refreshing in that it doesn't put the religious faith that liberals do in gun control diminshing violence. It also has a certain intuitive plausibility. But does support for private gun rights actually generate a spirit of martial interventionism? Actually, as far as libertarians are concerned, the connection runs in the other direction.

The central political problem for conservatives is maintaining virtue; for liberals equality; and for libertarians liberty—or avoiding government tyranny. This requires not just maintaining a balance of power—or checks and balances—among the three branches of government, but also between the government and the citizenry.

That's why libertarians insist that the Second Amendment was meant to protect not just the rights of states to maintain well-armed militias, as liberals insist, but also the right of private individuals to bear arms for both self-defense and as a check on government tyranny. Libertarians fear that a government that disarms its citizens while arming itself to the hilt shifts the balance of power and precludes the possibility of any serious resistance.

In the libertarian view, then, armed citizens are not tools for the grand imperialistic designs of a martial republic like Sparta, but the opposite. They are supposed to prevent the republic from conscripting them for its adventurism overseas without their consent. The aims here are defensive, not offensive; prevent war, not encourage it.

It is hardly a coincidence that the country's founding statesmen, like George Washington, saw no contradiction in both vigorously supporting private arms and warning against "foreign entanglements."

Indeed, so hardwired are libertarians to distrust an unchecked monopoly on power that they worry about its effect not only on the national polity but the international one. Much as libertarians detested the communist Soviet empire, they didn't think that a unipolar world at the end of the Cold War, even with their own country as the sole superpower, was necessarily a healthy state of affairs.

Cowen makes much of the fact that Americans own 42 percent of the world's private guns and America does 42 percent of the world's defense spending. But for Cowen's hypothesis that gun ownership breeds a martial culture to be correct, this ownership would have to be widespread. Instead, as Tuft University's Dan Drezner has shown, guns have become concentrated in a few hands, with the number of American households actually owning guns declining over time from around 55 percent in 1978 to about 32 percent now. Meanwhile, America's interventionism abroad has grown unabated.

There aren't great stats showing if the converse—that periods of high gun ownership have correlated with less American interventionism abroad—is also true. But it is significant that America assumed its post-World War II role of the global policeman only after the passage of the 1934 National Firearms Act, the first major federal anti-gun legislation (whose purpose was to prevent the Prohibition-related gangsters from laying hands on Tommy guns). At the same time, defense spending in this country ratcheted up from less than $100 billion in inflation-adjusted terms in 1947 to over $550 billion now. If there is anything that breeds American militarism besides external events, it is a standing army with a moral claim to Americans' pocketbook. Suppose if all guns in America were to suddenly vanish. Is it plausible that its militaristic foreign policy would be in the least bit affected so long as it maintains its global hegemony and defense spending?

Cowen might argue, of course, that just because libertarians aim to use gun ownership to check interventionism doesn't mean they'll succeed; noble desires can backfire and produce  results opposite to those intended. Perhaps. However, the only evidence he offers for this is the observation that "parts of the country with the most guns, namely the South, are also prominent supporters of the military."

Support for the military does not automatically equal support for interventionism in the sense of going overseas to kick foreign ass. Arguably, if there is flip side to gun-toting Americans, it is a Fortress America, isolationist mentality, a kind of belligerent defensiveness. (That's what Donald Trump seems to be cashing in on, as I noted in a previous column). I highly doubt that there was much support in Texas for Barack Obama's Libyan misadventure.

One can debate whether that's good or bad. But what's not debatable is that the connection between gun rights and martialism and martialism and interventionism is far from airtight. Indeed, it is possible that giving up on gun rights might further weaken yet another check on American adventurism and turn Uncle Sam into even more of a global wrecking ball.