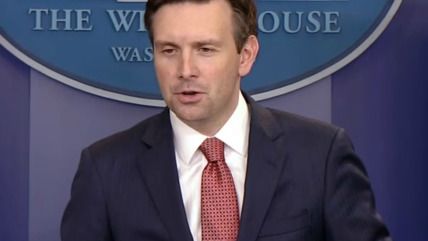 Two days after the massacre in San Bernardino, Marco Rubio said something that most gun control supporters probably thought was outrageous. The Florida senator, who is seeking the Republican presidential nomination, told CBS News "none of the major shootings that have occurred in this country over the last few months or years" would have been prevented by the gun laws proposed in response to them.

Last week Washington Post fact checker Glenn Kessler, asked to investigate Rubio's statement by a colleague who thought "it was almost certainly incorrect," discovered that Rubio was right. The implication, which Kessler was too polite to spell out, is that activists and politicians who push legislative responses to mass shootings are either fooling themselves or trying to fool us. The latter seems more likely.

President Obama has repeatedly implied that members of Congress have blood on their hands because they refuse to "do something" in response to mass shootings. Yet at a briefing the day after Kessler's article appeared, White House Press Secretary Josh Earnest could not cite any mass shootings that might have been stopped by expanded background checks or a federal ban on "assault weapons," the measures that Obama reflexively proposes after such crimes. Instead Earnest talked up another policy that would have made no difference: banning gun purchases by people on the federal government's "no fly" list, none of whom has been linked to a mass shooting.

The idea that "assault weapon" bans can prevent mass shootings is clearly a fantasy. The vast majority of guns used in these attacks—86 percent, according to a tally by Mother Jones—do not qualify as "assault weapons," an arbitrary category defined by military-style features such as folding stocks, pistol grips, and flash suppressors. Even if a law could magically eliminate the millions of "assault weapons" already in circulation, it would leave plenty of equally lethal alternatives.

There are similar problems with legal limits on magazine size, which Obama also supports. Laws can prohibit new sales but cannot make larger magazines disappear. And as Kessler pointed out, "an experienced shooter…can change a magazine in just two to four seconds," a pause that is unlikely to make a significant difference in attacks on unarmed people.

Expanding the federal background check requirement to cover private gun transfers as well as sales by licensed dealers, another idea favored by Obama, cannot reasonably be expected to have a noticeable impact on mass shootings either. As Kessler noted, the perpetrators of such crimes often have passed background checks and in any case rarely have criminal or psychiatric records that would legally disqualify them from buying guns.

Furthermore, decreeing that a background check be conducted every time a gun changes hands and making it happen are two very different things. It is hard to see how such a requirement could be enforced, especially without a national gun registry.

Felons who buy guns are already breaking the law, and so are the people who supply them, assuming they know about the buyers' criminal records. Yet criminals do not seem to have much trouble arming themselves. Survey data indicate that they generally obtain guns from people they already know or from black-market dealers, sources that would be unimpeded by a new background check requirement.

The "common-sense gun safety laws" touted by the president would impose new restrictions and burdens on law-abiding Americans in exchange for highly uncertain benefits. Especially when considered as responses to mass shootings, which is how the president and his allies present them, these measures make little sense upon calm reflection—something that gun controllers seem eager to prevent by blinding us with blood.