5 Things to Watch for in Tonight's GOP Presidential Debate

The race heats up as Trump, Cruz, and Rubio battle over foreign policy and more. 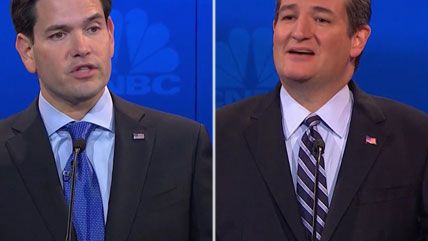 Tonight's primetime GOP primary debate will feature nine candidates: Donald Trump, Ben Carson, Ted Cruz, Marco Rubio, Jeb Bush, Carly Fiorina, Chris Christie, John Kasich, and, finally, Rand Paul—who made it to the mainstage only at the last minute, after CNN, which is broadcasting the event from Las Vegas, loosened the rules to allow him on stage after accounting for the Kentucky senator's strong showing in Iowa. A separate undercard debate between four candidates with low poll numbers—Mike Huckabee, George Pataki, Lindsey Graham and Rick Santorum—is set for earlier in the evening.

Tonight's debate is important because it comes at a time when many voters are starting to pay attention in earnest, and because the contours of this unusually chaotic race are starting to become more clear: Jeb Bush and Rand Paul are struggling in both polls and fundraising, and have faced repeated speculation that they are about to drop out of the race. Ben Carson has fallen rapidly from co-frontrunner status, and Carly Fiorina's campaign has struggled to gain traction outside of the debates. Chris Christie is surging in New Hampshire, but is still posting low polling numbers overall.

The Iowa caucus is still six weeks away, and no actual votes have been cast, so nothing is set in stone. But many observers increasingly see the race as a three-way contest between Donald Trump, Texas Sen. Ted Cruz, and Florida Sen. Marco Rubio, with Trump representing the party's populist furies, Rubio carrying the establishment, and Cruz trying—sort of—to split the difference between the two.

The staff of Reason will be live-tweeting both the mainstage debate and the undercard tonight starting at 6 p.m. ET, so make sure to check back in this evening. In the meantime, here are five things to watch for as you wait.

1) A whole lot of discussion about foreign policy and national security in the wake of terrorist attacks in Paris and San Bernardino: Moderator Wolf Blitzer has made it clear that this will be the dominant issue during tonight's debate: "We're going to focus on the #1 issue facing the American people right now, and all the polls suggest that it is the fear of terrorism, ISIS," he said on CNN over the weekend. Blitzer will be joined by CNN political correspondent Dana Bash and conservative radio Hugh Hewitt, who is known for his focus on foreign policy issues.

2) Ted Cruz vs. Marco Rubio on foreign policy: The pair have been going after each other rather aggressively on foreign policy following the terrorist attacks in Paris and San Berndardino, California, with Cruz taking a somewhat less overtly hawkish stance on military involvement in Syria, as well as electronic surveillance issues. This is probably the clearest policy divide in the GOP field right now, and most of the candidates are going to want to weigh in, with Chris Christie, Jeb Bush, and Carly Fiorina taking a more hawkish, pro-surveillance stance and Rand Paul—who has also been taking shots at Rubio recently—joining Cruz in attacking the party consensus.

3) Donald Trump vs. Ted Cruz on which one is a maniac:  At the same time that Cruz has been going after Rubio, he's also been pulled into a separate fight with Trump, who called him a "maniac" the other day. The proximate cause for this insult battle was Cruz's ecent closed-door warning to a group of potential donors that Trump might not have the judgment to be president; Trump, meanwhile, framed his "maniac" remark as a response to Cruz's attacks on Senate leadership. But the nuances of this feud may not be all that apparent or important tonight, as it looks more like a straightforward insult battle. Cruz has already responded on Twitter with a video reference to Flashdance (welcome to 2015, folks), which suggests the tone this squabble has taken on.

4) Whatever notably awful thing Donald Trump says next—and the reaction: In recent weeks, Trump has been running his campaign like a radio shock jock, calling, among other things, for banning Muslim immigration to the United States, shutting down parts of the Internet to stop terrorists, and a mandatory death penalty for all cop killers. He's generated a lot of negative attention in the process, but overall, it seems to be helping him: The most recent national polls show him climbing past the 30 percent ceiling many had imagined for him and posting numbers well into the mid 30s, and even hitting 41 percent in a Monmouth University poll published yesterday. However, Trump's attacks on Cruz this week did earn him his first pushback from major players in the world of conservative talk radio, including Mark Levin and Rush Limbaugh, suggesting that there may be some things he has a harder time getting away with saying.

5) Any discussion whatsoever of the giant spending bill now working its way through Congress: While the overall emphasis on national security is understandable given the recent attacks, it's still notable just how little the GOP candidates have talked about the budget situation in Congress. Part of that may be because the details of the deal are still in flux, but the specifics of the $1.1 trillion spending deal—including some controversial electronic surveillance provisions—have become more and more clear over the past few days as negotiations have made progress, and the full package is likely to be released tonight, right around the time that the debate takes place. Given that future presidents will be responsible for signing such things, it would be nice to see what the GOP candidates think of the one that's about to be sent to the White House for approval.