As campaign falters, the Kentucky senator "sounds the alarm." 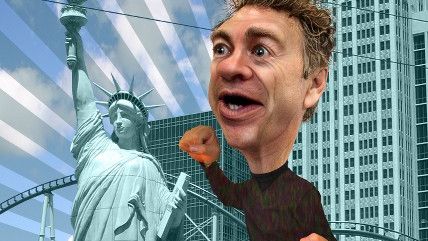 Rand Paul's loud and scary new ad attempts to give Marco Rubio and Ted Cruz the Willie Horton treatment, although instead of using weekend furloughs for convicted murderers to paint his opponents as soft on crime, the 90-second clip uses two men convicted of providing material support to Al-Qaeda while in the US as Iraqi refugees as a means to paint Cruz and Rubio as squishy open borders advocates.

Though none of the three Republican presidential candidates were in the Senate when Mohanad Shareef Hammadi and Waad Ramadan Alwan were arrested in 2009 (which led to a six-month moritorium on the Iraqi refugee program in 2011), Paul's struggling campaign uses them as an example to "sound the alarm" about the supposedly existential threat of terrorists entering the US through the Syrian refugee program. To drive this point home, the ad intersperses clips of Cruz and Rubio speaking favorably about allowing refugees into the country prior to last month's terror attacks in Paris, while a baritone-throated narrator intones over a dire action-movie score about Paul's intent to "protect Americans first."

on the issue of refugees while attacking the two most viable non-Trump candidates in the process. As my colleague Brian Doherty has noted, it is simply absurd to characterize Rubio as being for open borders and Ted Cruz's extensive immigration plan calls for, among other things, "building a wall that works," tripling the number of border agents, and placing stringent new limits on visas.

Reason's Shikha Dalmia has frequently highlighted the fact that Paul would never be mistaken for a pro-immigration activist, but Doherty also recently pointed out that today's Rand Paul is decidedly "weaker" than Rubio when it comes to cracking down on immigration:

Even Paul has admitted in the past that actually detaining or tossing the already-present illegal immigrants is impossible. And in terms of "toughness," Paul has enough libertarianism in his bones that he is weaker than Rubio on actual toughness-on-immigrants in rejecting the nightmare of E-Verify, even though it's a logical conclusion if you think that it's a serious problem having people coming here to work without the proper government issues paperwork.

Paul's campaign was given a life raft by CNN today, when the network announced that it will include him on the main stage of tomorrow's GOP presidential debate, despite the fact that he failed to meet the required polling of "3.5% in approved nationwide surveys or 4% in Iowa or New Hampshire." A Fox News poll showing him at 5% in Iowa demonstrated a sufficient amount of "viability" for CNN to bend the rules in his favor.

You may remember a Rand Paul who once vaguely resembled a libertarian back in June, when Reason Editor-in-Chief Matt Welch interviewed him about his principled opposition to the Patriot Act and his ambition to present a "new kind of Republican" to the electorate. Watch below.