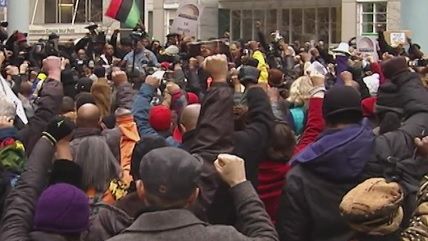 Thousands of protesters in Chicago are demanding the resignation of Mayor Rahm Emanuel over the police killing of Laquan McDonald last year, video of which was released last month. McDonald was shot 16 times by an officer while appearing to move away from him.

Last week, Emanuel fired the police chief, Garry McCarthy, who had served in that position since the beginning of Emanuel's first term. Yesterday, Emanuel apologized for police misconduct in front of the City Council.

Emanuel addressed three main themes in his passionate speech: justice, culture and community. He also criticized the police department, which is being investigated by the U.S. Department of Justice, for being quick to shoot, saying the department's "supervision and leadership," as well as the oversight agencies, failed.

"I take responsibility for what happened because it happened on my watch. And if we're going to fix it I want you to understand it's my responsibility with you," Emanuel said. "But if we're also going to begin the healing process, the first step in that journey is my step.

The first step, of course, would be for Emanuel to resign. He didn't. For him, the first step was a personal apology. The problems with the Chicago Police Department didn't start with Emanuel (the city pays out an average of $1 million a week settling claims against the police), but they festered under him. Emanuel did not run for his first term advocating for police reforms and it was not a major issue in his re-election campaign.

His electoral success suggests either, a) Chicago voters at large are not as concerned by police misconduct as activists make it appear, or b) Chicago's political system and institutions are broken and no longer responsive or particularly democratic.

If the former were true, Emanuel would probably not have felt the need to first fire McCarthy and then offer an apology. On the other hand, there's quite a bit of evidence that Chicago's political system is broken. The city government is rife with corruption, the "Chicago machine" is world famous. In the last sixty years, Chicago has only had two mayors that served two or more terms, Richard J. Daley, who was in office from 1955 until his death in 1976, and Richard M. Daley, who served from 1989 to 2011. In the eight years between Daleys, six people served as mayor, mostly in acting or interim capacities.

Chicago, like many major American cities facing an epidemic of police brutality and an utter lack of accountability for police misconduct, is a one-party city. That set up has a similar effect as it does in one-party countries—it stifles dissent, limits political debate, and erodes democratic institutions.

Last year, Emanuel won re-election over Chuy Garcia, who mainly ran a campaign against Emanuel's modest efforts at returning Chicago to fiscal stability. Garcia did not make a major issue of police misconduct, and his politics suggest that he, like Emanuel, would not have done much to renegotiate police contracts in order to remove some of the systemic features that contribute to police brutality and the lack of accountability for police officers.

A resignation from Emanuel would not solve all of Chicago's problems. But at least it would represent an acknowledgement of how severe those problems are.